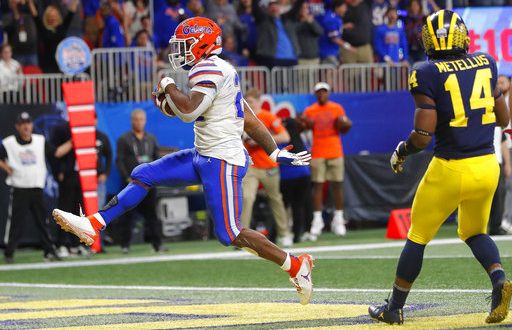 Florida running back Lamical Perine (22) runs into the end zone for a touchdown against Michigan during the first half of the Peach Bowl NCAA college football game, Saturday, Dec. 29, 2018, in Atlanta. (AP Photo/John Bazemore)

A peek at Florida’s 2019 RB Situation

Florida has plenty to balance at running back in the quest to find some security in the position in the future. But there’s plenty of time to do so.

For now, the RB position for Florida isn’t a matter of what they don’t have. Rather, the main issue lies in configuring the veteran talent of the future, the insane amount of depth that it does have, and who will succeed Lamical Perine.

The competition at RB, present and future

Perine is safely the starting running back for the 2019 season, after declaring to play his senior season.

With the departure of Jordan Scarlett, he’ll see plenty of action in the fall as the sole veteran running back option. He’s displayed plenty of consistency in both his sophomore and junior seasons, notching nine touchdowns in his sophomore season, and eight in his junior season.

He saw a jump in yardage between the two years. He accrued a respectable 643 yards in his sophomore year. But he nearly scratched the surface of a 1,000-yard season in his junior year, putting up 996 yards total on the year. His experience is undeniable and should prove to be key as far as leadership in the role.

How will the backup position play out?

Will a healthy Malik Davis get some reps? Time will tell, and he has plenty of it. Just three games and a foot injury gave Davis the eligibility to earn a medical redshirt, allowing him the chance to play an additional year. With additional time with the program, there’s plenty of opportunities to develop Davis with his extended time.

Dameon Pierce could prove plenty of help as a backup too in his sophomore season. He appeared in all 13 games in 2018, contributing 424 yards and two rushing touchdowns. Iverson Clement didn’t see much time in 2018, but the redshirt freshman has plenty of time to develop.

Though he’s confident in his talent, Dan Mullen seems particularly open to any sort of competition at the position.

“I just love competition,” Mullen said. “You know one of the things you see — we give a lot of guys reps, we try to give as many people reps as we can. One, to build depth, but two for competition … I think the great thing at quarterback now is we have some experience at that position coming in, and experience in the system, but we also do at running back.”

In terms of newcomers, four-star 2019 commit Nay’Quan Wright shows promise but has struggled with injury, not allowing him to play in his junior year.

Overall, the running back position is relatively stacked, and shows much promise for the present and future. Development in the spring will be crucial to success at the position when the season comes.

With two games left to play in the regular season, the Florida Gators are well …