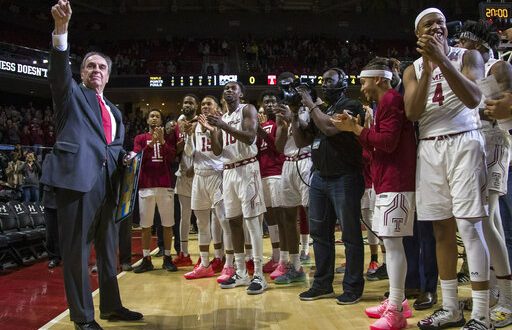 Temple's head coach Fran Dunphy, left, waves to the crowd as he is about to coach his last regular season home game with his team beside prior to the first half of an NCAA college basketball game against Central Florida, Saturday, March 9, 2019, in Philadelphia. (AP Photo/Chris Szagola)

Belmont will dance in March Madness

The road to Minneapolis starts today.

And as you’re finalizing your bracket and preparing for the most stressful three weeks of the year, the NCCA Tournament First Four action begins tonight.

Following the FDU and Prarie View A&M matchup, the Belmont Bruins will take on the Temple Owls. In addition to an already stressful matchup, this is the first meeting between the two teams ever. The winner of this game will go on to face Maryland in the first round of the NCAA Tournament.

Tonight marks the Bruins eighth NCAA Tournament appearance in the last 14 years; however, the previous seven were automatic bids.

“Our guys are certainly excited at what’s about to take place,” Heach coach Rick Byrd says.

Lacing up our dancing shoes!!!! 8 NCAA appearances in the last 14 years! See you all in Dayton on Tuesday! #MarchMadness #NCAATournament #itsbruintime pic.twitter.com/PDY1UWmCac

Belmont enters the matchup with a 26-5 record. But, that overall stellar record is now essentially irrelevant as their season is on the line: beat Temple or the season’s over. The Bruins had practice earlier in Dayton and Byrd says his team is ready to face Temple.

“We had to go over Temple’s offense and what we’re going to do offensively. So, I’m not concerned about their readiness to play,” Byrd says.

Coach was especially happy to see his two seniors dance at March Madness before graduation.

“When you’ve been lucky enough like we were to come here so often like we have in a short period of time, three years seem like a long time that you don’t make it,” Byrd says.

Belmont senior Dylan Windler is one of the most explosive and versatile players on the roster. The 6-foot-8-inch senior averages 21.4 ppg, 10.7 rebounds, 2.6 assists and a field goal percentage of 54.8. In fact, 28 of his 73 career double-doubles are from this season alone. Furthermore, eight of his double-doubles include him scoring at least 30 points.

The Belmont Bruins will face the Temple Owls on Tuesday, March 19 at 9:10 EST.