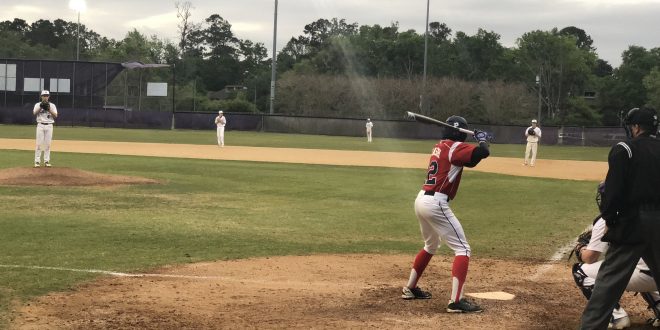 Junior pitcher Brian Meert started the game on the mound for Gainesville. After a leadoff walk, the Lake Brantley Patriots found success hitting with a sacrifice fly to build an early 1-0 lead.

The Patriots then rallied with two outs to drive in one more run with a single to center field to extend their lead to 2-0 heading into the bottom half of the first inning. Gainesville started the inning off with a walk, which led to Marcos Aular hitting a single to left field to drive a run home to make the score 2-1.

Brian Meert started off hot in the second inning as he picked up two straight outs. After a double to right field and a walk, the Hurricanes picked up the final out of the inning to keep the score at 2-1. A leadoff hit-by-pitch and error by Lake Brantley gave Gainesville runners on second and third base with two outs, but the Hurricanes were unable to capitalize.

Meert threw a second-straight scoreless inning facing only three batters. The Hurricanes started the inning off with a single from Marcos Aular but were unable to score; the Patriots continued to lead 2-1 heading into the fourth inning.

Lake Brantley found themselves in a good position to start the fourth inning with bases loaded and no outs. Following a soft ground out at home plate, Evan Siegner came up clutch with a single to extend the Patriot lead to 3-1.

Luke Heyman continued the offense by hitting a deep sacrifice fly ball to right field to extend Lake Brantley’s lead to 4-1 at the end of the top of the fourth. Steve Pressley was brought in to pitch by the Patriots and he threw a scoreless fourth inning.

Lake Brantley continued their previous success with a leadoff walk and a double in the fifth inning but Gainesville threw out a runner at home to end the inning and no runs scored.  In the fifth, Gainesville loaded the bases but could not score.

Heading into the final inning, Gainesville made its first pitching change. The Hurricanes brought in Brian Young in relief. Young walked the first batter, who eventually scored after a steal and an error to raise Lake Brantley’s lead to 5-1.

Logar Keller knocked two more Patriot runs in on a home run to left field to make the score 7-1. Ryan Ealy was brought in as a second relief pitcher for Gainesville.

Ealy went on to retire three batters to end the half inning. The Hurricanes could not knock in any runs in the final half inning and fell to Lake Bentley 7-1.

Despite the loss for Gainesville Hurricanes, head coach Chris Malphurs had a positive outlook on the game.

“We use these games to get better,” he said. “Our focus right now is the district season and trying to get better.”

As the Gainesville Hurricanes make their way towards competing in the district tournament, their next baseball game will be at Eastside on Friday at 6:30 p.m.