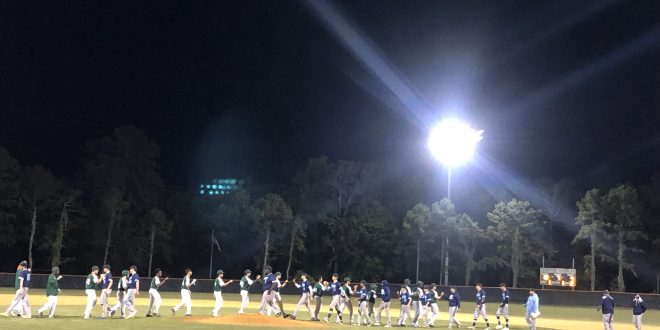 PK Yonge Baseball Bounces Back With a Win Against Eastside

The PK Yonge Baseball team went on the road Tuesday to meet up at Eastside High School to play against the Rams. The Blue Wave was able to break their losing streak with a 10-4 win against the Rams.

During the first inning, both teams were able to quickly get on the scoreboard, each scoring a run.  In the second inning, PK’s Kyle Chappell made his way around the diamond, finally making it home after a drop by the Rams’ catcher. Towards the end of the inning, Nate Nicholson and Kyrin Griffith hit a double, allowing Nicholson to make it to second and Griffth to make it home.

@BaseballPKY took advantage of Eastside’s error and scores another run. Making the score 5-1, with PK Yonge in the lead. @CamilaMaffuz @ESPNGainesville pic.twitter.com/GxWxxqE4a8

There were some good plays throughout the whole game, but the fourth inning is where things started to pick up. After bases were loaded, Blue Wave player Casey O’Dell makes it home after a hit by Nate Nicholson.  After another hit, Kyrin Griffith and Danny Dawson are also able to make it home, scoring two more runs for PK Yonge.

Great inning for @BaseballPKY as they score 5 runs and extend their lead. The score is 10-1 as we head to the bottom of the 4th inning. @ESPNGainesville pic.twitter.com/cTAdoCmBEA

During the sixth inning, the Rams were able to come back with three runs but it wasn’t enough to stop the Blue Wave from getting the win.

PK Yonge senior pitcher Isaih Malone had a great game. He was able to pitch six innings and was able to get four strikeouts throughout the game. Kyrin Griffith was able to end the 6th inning with a great diving catch at the left field.

Hear From a Player

PK Yonge’s Drew Dawson explained that his team was able to work together as a team to achieve this win.

The Blue Wave now has an overall record of 2-4. They will next play at Newberry on Thursday.

Camila is a senior at the University of Florida, who served as a beat writer for the women's basketball team from 2019 until the 2021 season. She was also a beat writer for the Gators football team during the 2020 season. Camila is also WUFT's news director as well as a sports reporter/anchor.
@CamilaMaffuz
Previous Williston Baseball Rolls Over Dunnellon
Next Lake Brantley Patriots Baseball Defeats Gainesville Hurricanes