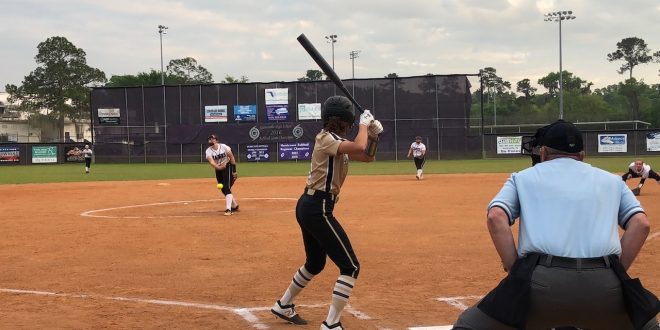 The Hurricanes came into the game as the favorites with their one and only loss coming back on March 1st. Meanwhile, the Bobcats were on a hot streak after winning three games in the past six days. History also favored Gainesville; their last loss to Buchholz was in March 2014.

In Wednesday’s game, star pitcher Alissa Humphrey returned to the mound for the Hurricanes as Makenzie Wilkerson started for the Bobcats. An early strikeout from Humphrey was followed by a single for the first hit of the game, courtesy of the Bobcats’ Jenna Smith.

However, Smith was tagged out after a single on the ensuing play. Another strikeout from Humphrey ended the top of the inning with no runs on the scoreboard.

At bat, Gainesville suffered two outs before Humphrey hit a deep double to left field. Unfortunately for the Hurricanes, a pop fly to left field would end the inning, thus leaving the game scoreless.

At the top of the inning, Humphrey returned to her dominant self by striking out the side. There was a little more action in Gainesville’s second time at-bat.

Following two outs in left field, Sidney Karras reached first thanks to a Buchholz error. However, a sliding catch in center field ended the inning with a blank scoreboard once again.

The third inning saw Humphrey strikeout another three Bobcat batters; however, Buchholz’ Abby Henson managed to reach first thanks to a bunt and an error.

Alas, no runs came out of it. The same could be said for Gainesville at their turn to bat, though Ashton Palmer recorded her first hit of the game on a single to left. Needless to say, the game was still tied at zero apiece heading into the fourth inning.

Humphrey and the Hurricanes’ defense continued to hold strong by allowing no runners on base. By the end of the fourth inning, Humphrey had only allowed one hit. In lieu with the theme of the night, no runs were scored in the bottom of the fourth inning, either. Two pop outs to left and a groundout to third left the scoreboard operator doing minimal work. One fan even shouted for more hits while the teams switched fields.

In the fifth inning, Humphrey stayed hot by striking out the side again. With just one hit so far, the Jacksonville-commit showed why she is recognized as one of the best pitchers in the region, hence her Player of the Week recognition by Miracle Sports two weeks ago. Katherine Gray, another former Player of the Week, hit a single deep center to start the bottom of the inning. On the ensuing pitch, Gray advanced to second but a groundout ended the Hurricanes’ hopes of being the first team to get on the scoreboard.

“We were popping the ball up a lot,” Head Coach Chris Chronister said about the lack of runs. “We had some decent hits that they made some nice defensive plays on.”

The game was still scoreless heading into the sixth inning and nothing changed with Buchholz at bat. Other than a running catch by Gainesville’s Sidney Karras, the highlights of the top of the sixth inning were two more strikeouts from Humphrey. Ashton Palmer opened up the bottom of the sixth inning with a grounder to centerfield. It was close but the umpire ruled Palmer safe, followed by a thunderous roar from the home crowd.

Following a walk, the bases were loaded for Gainesville when Summer Palmer stepped up the plate. With no score yet, Palmer knocked a double deep left to bring home two runs. On the very next pitch, Palmer herself reached home on a double by Karras. Parris Wiggs followed up Karras and Palmers’ double with a double of her own that also brought in two runs. Three-straight batters, three-straight doubles, each with two RBIs. Just like that, the Hurricanes led 6-0 going into the final inning.

Chronister attributed the sudden influx of runs to a decrease in pop flies. “We did start putting the bat on the ball and hitting line drives, which is what we were talking about the whole game,” Chronister said, “Fly balls were just easy outs for them.”

Three groundouts later, the scoreboard read 6-0 in the Hurricanes’ favor almost an hour-and-a-half after the first pitch. It was Gainesville’s fourth shutout and eighth win of the season. However, the Hurricanes’ win will be short-lived as their next game is against Keystone Heights in the Tournament of Champions on Friday, March 22nd.

A second-year tournament featuring some of the top teams in the Florida, Chronister expects the competition there to be especially tough.

“The level of play will definitely increase when we go over there so we’ll have to be on our A-game,” Chronister said, “I hope we can score runs like we did in the sixth inning tonight.”

As for Buchholz, they return to their home-field on Tuesday, March 26th to face off against Lake Minneola High. They fell to 6-5 while Gainesville improved to 8-1.