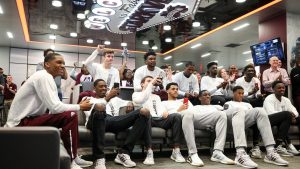 The #5 seeded Mississippi State Bulldogs will face the #12 seeded Liberty Flames Friday at 7:27. The Bulldogs finished the season at 23-10 and 6th in the SEC, while the Flames ended their season at 28-6 with an Atlantic Sun championship and their first NCAA Tournament bid since 2013. With March Madness finally here, this is an intriguing match up that could end in a potential upset.

Mississippi State’s most recent game was a loss to Tennessee in the SEC Quarterfinals. Finishing 6th in the SEC earned the Bulldogs a bid into the NCAA Tournament. The SEC is a tough conference and the Bulldogs lost some close games during the season. They have some quality wins over tournament teams such as Auburn and Florida. The Bulldogs are a high scoring team led by Senior Guard Quinndary Weatherspoon. Weatherspoon averages 18.2 PPG, 4.7 RPG, while shooting 50.9%. The Bulldogs finished the season with a top 20 ranked offensive-efficiency rating.

Liberty is currently riding a five-game win streak and is fresh off a conference championship. Liberty has a balanced scoring attack led by Junior Forward Scottie James. James is averaging 13.1 PPG, 8.8 RPG, while shooting an efficient 67.6% from the field. The Flames also have two guards in Caleb Homesley and Lovell Cabbil Jr. who both average over 11 PPG. The Flames have depth and a solid bench. They are a productive team offensively shooting 49% on the season. The Flames don’t turn the ball over too much and are a threat from the three point line. This is a team that should not be taken lightly in the tournament as they could be a potential upset bid in the 1st round.

Get to know the @LibertyMBB, who play Mississippi State tomorrow in San Jose: https://t.co/uavo1N3xdQ

There have been 47 upsets of 12 seeds over 5 seeds since the NCAA Tournament expanded in 1985. The most recent 12 seed to beat a 5 seed was Middle Tennessee defeating Minnesota in 2017. There was no upset by a 12 seed in the 2018 tourney. The overall record for the 12 seed vs the 5 seed in NCAA tournament history is 47-89.

This game could go either way with both teams being able to light up the scoreboard. In a battle of two high-powered offenses the team to play better defensively will most likely get the nod. Both teams shoot the three ball effectively so it will be interesting to see who steps up in the first round. This is a tough march madness game to pick as both of these teams are capable of advancing to the second round.