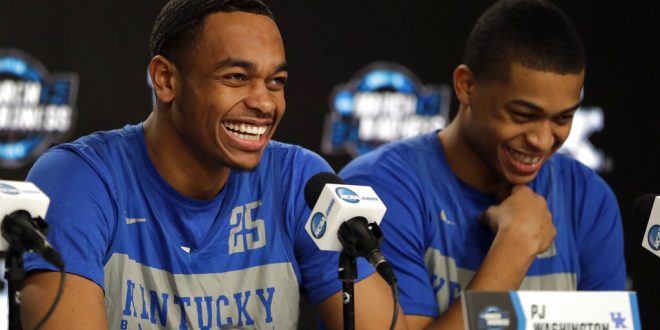 Today marks the second day of Sweet 16 action, where eight teams are fighting for the final four spots in the Elite 8.

These remaining matchups include LSU and Michigan State, Auburn and North Carolina, Virginia Tech and Duke, and Houston and Kentucky.

Kentucky’s Road to the Sweet 16

The 2-seeded Kentucky Wildcats matched up against the 15-seeded Abilene Christian Wildcats.

Not only do the two universities have the same mascot, but they also had the same regular-season records of 27-6.

The major difference between the two is their conferences. Kentucky did it in the SEC, while Abilene Christian belongs to the humble Southland Conference.

The difference was obvious in the first round, as Kentucky got by 79-44.

In the next round, Kentucky matched up against 7-seed Wofford. This matchup proved to be more difficult for the Wildcats, as they only led by two points at the break.

The second half was just as close as the first, but Coach Calipari’s guys got the job done and won 62-56.

Houston’s Road to the Sweet 16

The University of Houston had a tremendous regular season, ending with an overall record of 33-3, with a 16-2 record within the American Athletic Conference.

The Cougars finished ahead of fellow tournament teams UCF and Cincinnati. However, they lost to Cincinnati in the conference championship game.

In the first round of tournament action, Houston faced 14-seed Georgia State (24-9). The Cougars, like the Wildcats, got by easily, winning the game 84-55.

Unlike Kentucky’s game against Wofford, Houston finished off 11-seed Ohio State in an easier fashion, ending the game 74-59.

Keldon Johnson has led the way for the Wildcats in the tournament. Against Abilene Christian, Johnson dropped 25. However, against Wofford, he only put up 9. The Wildcats will need Johnson to show up if they want to continue.

The Cougar’s key man in the tournament thus far has been senior guard Corey Davis, Jr. In the regular season, Davis averaged 17.1 points, 3.4 rebounds, and 2.8 assists per game.

In the tournament, Davis has upped his scoring game and has averaged 23.5 points per game.