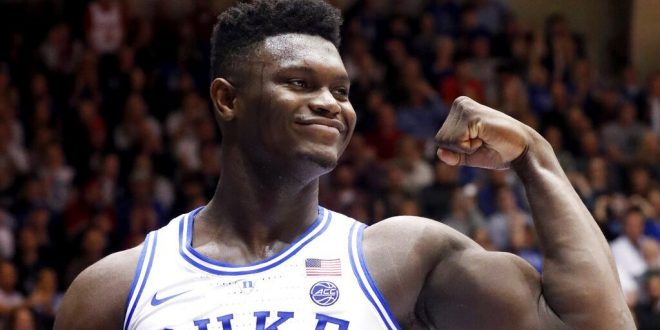 Duke's Zion Williamson (1) celebrates after he scored against North Carolina State during the second half of an NCAA college basketball game in Durham, N.C., Saturday, Feb. 16, 2019. (AP Photo/Chris Seward)

A Zion-less Duke fell 72-77 to Virginia Tech during an ACC regular season game in February 26th. Fast forward a month and these two Basketball giants meet again in one of the most prestigious stages of the NCAA Tournament, the Sweet 16.

Zion Back in the House

Zion Williamson is undoubtedly the most talked about college basketball player of this season. Williamson’s strength, speed, size, ability, age and game sense make him stand out from the rest.

Williamson proved to be human when he suffered a mild knee sprain in the first minute of a regular season game against rivals UNC. Teammates, coaching staff and fans felt the star freshman’s absence that same afternoon during UNC’s 88-72 victory.

Williamson spent almost one month on the sidelines missing another 5 games. Duke fell to Virginia Tech and UNC in this 5 game span.

Only the delusional doubted if the South Carolina native was fit and ready when Duke announced he was eligible to play in the first game of the ACC Tournament. Duke went on to win the ACC Championship. Williamson averaged 10 assists and 27 points in the span of the three games against Syracuse, North Carolina, and Florida State.

UNC was on Williamson’s hit-list and he managed to get revenge for those losses during his absence. Virginia Tech is next up on his list.

Does Virginia Stand a Chance?

The Hokies are not hopeless even though the Blue Devils are undoubtedly favorites in this match-up. Virginia finished its regular season with a 12-6 conference record and a 28-8 overall record. The Hokies strong starters have kept the school’s hopes up as the season has developed.

Sophomore Nickeil Alexander-Walker has been the most explosive Hoakie this season tallying 16 points, 4 rebounds and 4 assists per game. Not far behind are Junior Kerry Blackshear Jr., and Seniors Justin Robinson and Ahmed Hill, all averaging 13 plus points-per-game.

The first two rounds of the NCAA Tournament has been cake for Virginia Tech. The Hokies outscored both Saint Louis and Liberty by more than 10 points. Virginia Tech will have to do something special to beat Duke tonight at 9:39 p.m. in Washington D.C.

Figuring out a plan to make it big in the soccer scene in the U.S. or anywhere else in the world. For now, I'm having a blast writing for ESPN Gainesville and learning a lot from managers and students around the workplace. I'm covering the TV beat for Gators Soccer. What a team! Follow me on twitter: @J_AguerrevereUF
@@J_AguerrevereUF
Previous Auburn and North Carolina Meet in Sweet 16
Next Sweet 16: Kentucky Wildcats Face Houston Cougars