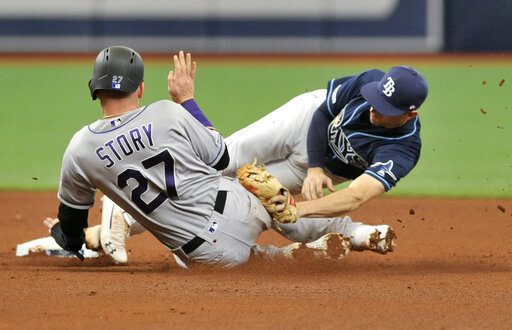 Although there was plenty of missed opportunities with too many runners stranded on base, the Tampa Bay Rays are still off to their best start in Franchise history.

Although the Rays won the series against the Rockies, Charlie Morton, the biggest free agent grab in Tampa Rays history went six innings, allowing only four hits and giving up just a pair of walks. He did not allow a run, putting his ERA at 1.64.

Additionally, the Rays left the bases loaded in a two-out situation in the bottom of the sixth inning. Ryne Stanek pitched an inning of no hit ball with a strikeout in the top of the seventh.

In the bottom of the tenth, Rockies’ Wade Davis struck out Kevin Kiermaier with two runners on, to extend the game even longer.

Chris Lannetta would hit a solo home run in the top of the 11th inning to give the Rockies a 1-0 lead and that would be the ball game.

Rays outfielder Tommy Pham set a new Rays record with a first-inning single against the Rockies.

Even more, it marked his 39th consecutive game reaching base, dating back to last season. His streak began on August 21 last year.

Before the Rays acquired Pham from the Cardinals last year, he had a .730 OPS with the Cardinals prior to the trade, then posted a 1.071 OPS in 39 games with the Rays.

Tampa Bay Rays reliever Jose Alvarado, who is beginning his third year pitching out of the Rays’ bullpen unleashed possibly one of the nastiest pitches with his fastball. This 99 mph pitch left Mark Reynolds startled as he was struck out on the side.