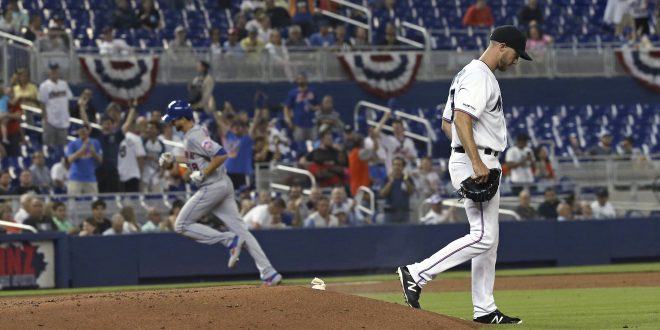 It was a rough night for the Marlins as they dropped to 2-5 on the season and 5th in the NL East Wednesday night. While it is still very early, fans did not have much to be optimistic about during the game. Mets fans, on the other hand, had a lot to cheer about in pitcher Jacob DeGrom.

No Answer For DeGrom

Degrom had himself a night, starting the game off right by smashing a home run after already nursing a one-run lead.

Scoring wasn’t DeGrom’s only strong suit last night, striking out a career-high 14 in seven shutout innings. DeGrom would only allow one Miami runner to reach second base against him and only gave up three hits total, including a walk.

DeGrom finally ended his streak of five consecutive losses to the Marlins, and when asked about his performance, DeGrom explained that tonight was the best he felt in a long time.

“He just does the same thing every time” praised Mets manager Mickey Callaway. DeGrom fueled the Mets to three consecutive victories over the Marlins for a series sweep, however, the win almost slipped away in the ninth inning as the Marlins made a run.

The Rally That Almost Was

After DeGrom threw 114 pitches, the Mets trotted out their relief pitchers, who would help the Marlins close the deficit in the 9th inning from 6-0 to 6-4.

Hey. It is no longer a shutout. pic.twitter.com/pqWlsKMzD0

While momentum was on Miami’s side, Pitcher Edwin Diaz came on and shut the door on Miami by getting Curtis Anderson to fly out with a runner on for his third save.

Following a day off, the Marlins will head to Atlanta to face off against the Braves for their first away games of the season. The first game is on Friday and starts at 7:20 p.m. The Braves are 2-3 on the season and 3rd in the NL East.