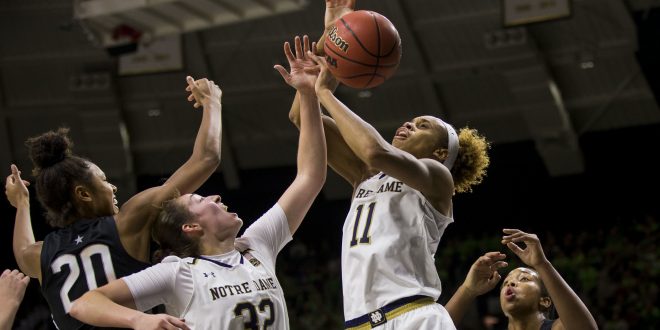 Notre Dame vs. UConn in the NCAAW Basketball Final Four

The No. 1 Fighting Irish and the No. 2 Huskies once again meet for a Final Four match.

The last time these teams met in the NCAA tournament was last year, where Notre Dame won and advanced to the championship in overtime, 91-89.

The rivalry was well-established back in 1996, and despite the Irish winning the Final Four last time, the Huskies lead in the all-time series, 37-12.

Notre Dame dominated Bethune-Cookman, 92-50, in the first round, where they moved on to play Michigan State, beating them 91-63. In the third round, they struggled against Texas A&M but came out victorious, 87-80.

In the Elite Eight, the Huskies didn’t give Stanford a fighting chance when they bulldozed over them, 84-68.

Roots in the rafters. Future’s on the floor.

As for Connecticut, they blew Towson out of the tournament in the first round, beating them, 110-61.

However, the rest of the rounds came close for the Huskies. They beat Buffalo next, 84-72, and then moved onto UCLA in the third round, winning 69-61.

In the quarterfinals, they faced Louisville, the No. 1 seed in the Albany region, and beat them 80-73.

Both teams faced obstacles on the road to the Final Four, but the persistence led them to face each other once again in the tournament.

At The Final Four

The Irish and the Huskies will play tonight in Tampa. This is the first time since 2006 that UConn is not the No. 1 seed in their region.

UConn needs to make sure guard Katie Lou Samuelson is healthy for the game because of a previous back injury she got while playing Houston in March. The injury forced her to sit out of the ACC tournament.

Despite the injury, she scored 29 points against Louisville last weekend. Other key players for the Huskies will be No. 1 freshman recruit Christyn Williams and Crystal Dangerfield. The Huskies are coming in as the underdog, not having won the Final Four round the past two years.

Notre Dame has arguably become the best team in the country with the talent they have on the court. Arike Ogunbowale and Jackie Young have proven to be important to the Fighting Irish when it comes to getting points on the board.

In addition, they have 6-foot-4 Jessica Shepard, who is a sharp finisher and passer. Overall, the five starters all scored in double figures which will prove difficult for the Huskies.

After all, Notre Dame came back to beat UConn last year in the Final Four in overtime.

Catch the game tonight on ESPN2 at 9 p.m.

The winning team will either play Baylor or Oregon in the championship.

I am a fifth-year journalism major, specializing in sports and media. My favorite sport to watch and cover are college and NFL football. When I'm not doing that, I enjoy hanging out with my cat, going to concerts and traveling.
@sportsabrina
Previous Gators Gymnastics Set to Begin Regional Action in Corvallis
Next Baylor and Oregon fight for a spot in the NCAA Women’s Championship