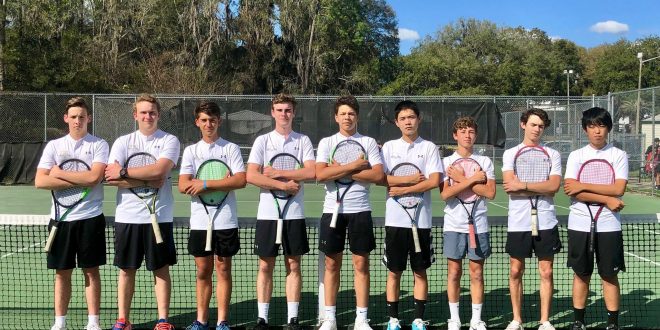 Eyes on the Prize for Buchholz Tennis

District tournament play has begun and the Buchholz tennis team aims to make a statement.

After falling just short to Fleming Island last season and finishing as runner ups in the district tournament, the Bobcats hope to reclaim the title this week. Matches began this morning at Flagler High School and will run through tomorrow afternoon for the boys. Girls will begin play on Wednesday and wrap up on Thursday.

The Bobcats started the tournament off strong winning all their matches today. This is no surprise considering their undefeated record. Tomorrow the boys will begin to play at 8 am.

According to Ben Shelton, son of UF Men’s Tennis Coach Bryan Shelton, the Bobcats have their head coach to thank for their success thus far. Shelton described Coach Bobbi Meehan as “someone who is always full of energy, positivity, and motivation. She encourages us to be better every day”. The Buchholz tennis team is comprised of a close-knit group of student-athletes that always have each others’ backs according to Shelton.

This season Shelton had the honor of being a team captain alongside junior Evan Graetz. He said he’s thankful that he has had the opportunity to step up and develop as a leader.

“I love pumping up my teammates and just being there for them”explained Shelton.

With their eyes on the prize, the Bobcats hope to advance to regionals and later state after this week.

Shelton says, “We’re focused and I know my teammates and I will come out ready to play”.

Even if Buchholz doesn’t advance as a team to regionals or state both Shelton and freshman Spencer Dorosheff will move on to state alongside Coach Meehan.

Maddie Schmidt's goal is to become a college football reporter. Be sure to check out her sports blog, mygamedaygal.com.
@@maddieschmidt15
Previous Russell Wilson and the Seahawks agree to a four-year 140M Extension
Next First Round Not Going as Planned for Bolts and Pens