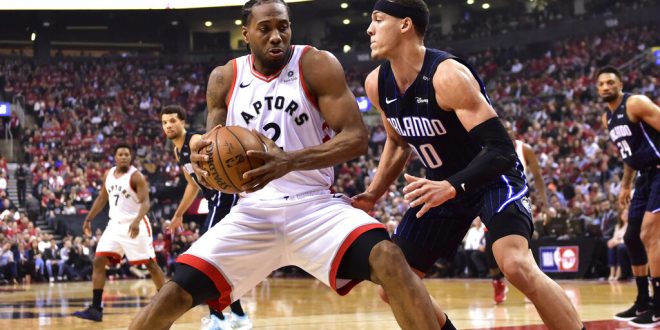 The Toronto Raptors most definitely redeemed themselves from a disappointing Game 1 performance.

Following D.J. Augustine’s late heroics on that occasion, the Raptors needed a pair of big performances from their star-studded duo. Head coach Nick Nurse received just that from Kawhi Leonard and Kyle Lowry.

Leonard netted 37 points and Lowry added 22 as the Raptors cruised over the Orlando Magic 111-82 Tuesday night in Toronto.

After the game, Nurse said Lowry was “at his finest” in Game 2 of the series. Lowry was held scoreless in Game 1, but he drew high praise from both his coach and Leonard after Tuesday.

“He did a great job of bouncing back,” Leonard said. “He’s a pro. That’s what pros do, they know it’s just one game and they come in the next game ready to play.”

The first-round matchup now heads to Orlando for the next two games. Game 3 is scheduled for 7 p.m. ET from the Amway Center on Friday.

The series continues at our house on Friday. pic.twitter.com/R2oot56LXN

Lowry leads from the front

Indeed, it was just one game that Lowry was held scoreless. But the playoff performances he’s produced in his career haven’t exactly been eye-popping. He’s still shooting just 41 percent from the field and 33 percent from 3-point range, yet Tuesday’s showing was a step in the right direction.

Lowry was aggressive and tenacious from the start. Fifteen of his 22 points came in the first half. His willingness to drive to the basket and effectiveness from three-point range (2-4) were big reasons for the Raptors’ 12-point lead at halftime.

On the defensive end, he and the Raptors were just as immense. Augustin, who hit the game-winning shot last Saturday, was held to just nine points on 1-6 shooting. Guard Aaron Gordon was the only player to score at least 20 points for Steve Clifford.

Orlando is still in a great position to give the No. 1 seeded Raptors a run for their money. Once again, the series’ next two games will be played on their home court.

Although, Clifford’s team will need to reproduce their efforts from Game 1 and not Tuesday night’s game. Then, Orlando was able to outscore Toronto 19-9 in the game’s final five minutes. While they did need Lowry to go scoreless to win, they’ll find solace in the fact that the team’s leading scorer, center Nikola Vucevic, only had 11 points in that win.

Both teams have now gotten their playoff legs under them. Whichever team’s all-stars can produce consistent performances this series may decide which team advances. The onus is now fully on Lowry and Leonard.