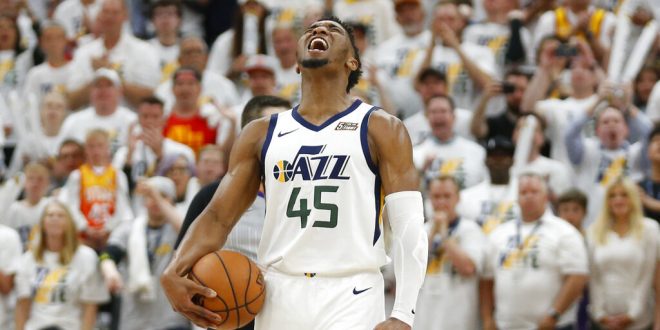 The Utah Jazz has held off elimination and forced a game 5 with their first win in the series. The game was close most of the way, but a late scoring run led by Donovan Mitchell really helped push the Jazz over the edge. Mitchell scored over half of his total points in the fourth quarter, bringing his point total up to 31 for the game. Even with a shaky start, Mitchell knows that the Jazz never quit.

For the Houston Rockets, most of their scorings were done through their starting five. James Harden led the way with 30 points. Chris Paul was not far behind though with 23 points, eight rebounds, and seven assists. Even with some impressive playing most of the game, Harden says it is always tough to lose.

The scores for the game remained pretty close minus an early and late scoring run from the Jazz. Let’s go into detail on how it went down.

The Rockets started early with a quick steal and three point jumper from PJ Tucker. Jae Crowder regained some of the points though with a driving layup to make the score 3-2. The Jazz starts to pull away with about eight minutes left on the clock. A tip shot from Mitchell would put the Jazz up by five.

Harden would end the scoring drought for the Rockets though with a driving layup with 2:50 left in the first quarter. Followed by almost a minute of no scoring from either team, Paul received two sets of free throws to get the lead down to eight. Austin Rivers would then complete a two-foot dunk to diminish the lead even more.

The quarter would not end without an answer from the Jazz though. Mitchell made both free throws to give the Jazz an eight-point lead to end the quarter.

Utah would extend their lead early in the second with a layup from Derrick Favors to make the score 35-24. The next score for either would not come until a little over a minute later when Paul made a layup.

This made the Rockets only down by 10. Houston would continue to work on the Jazz’s lead and would get back within six after a jump shot from Harden. The Jazz never stopped scoring though, and with 5:30 left in the second quarter Utah would still be up 43-34.

Houston would get Utah’s lead down to four late in the second after a pair of foul shots for Harden. The game went straight into another set of free throws for Ricky Rubio to put the Jazz up by seven with 1:16 left to play before the half.

After a dunk from Clint Capela, Jae Crowder would get two foul shots. This would be the last score before halftime, making the game 53-47.

The Rockets went to work early to start the second half. Eric Gordon made a three-point jumper in the first 11 seconds of the third. They would be back within one after a free throw from Capela.

Houston would go ahead 57-55 after free throws from Harden. The game would go back and forth on scoring for the next two minutes. With 7:05 left in the third, the Rockets were up 63-60.

Following a few back and forth scoring possessions, the game would still be close at 75-73 Houston with just 1:32 to play in the third. The quarter would end with a two-point shot from Paul to put Houston up by 3.

Mitchell went to work early in the fourth to tie the game up 79-79. The next score from Rubio would put the Jazz up by two. And this is about where Mitchell went off. The next four scoring possessions for the Jazz would all be completed by Mitchell, giving Utah an 11 point lead.

Harden tried to diminish this lead with a two-point shot but Royce O’Neale responded quickly with a pair of foul shots and a driving layup, putting the Jazz back up 95-84. A two and a half minute scoring drought would follow the layup.

Paul would end the drought with a two-foot dunk. But soon after Mitchell would have another two straight scoring possessions to make the score 99-86. Following an O’Neale foul, Harden would make all three foul shots to bring his team back within 10 with a little over two minutes to play.

Favors would continue to work for the Jazz and would make a dunk and tip shot back to back to give his team a 14 point lead. Mitchell would end the game with two free throws that would give the game a final score of 107-91.