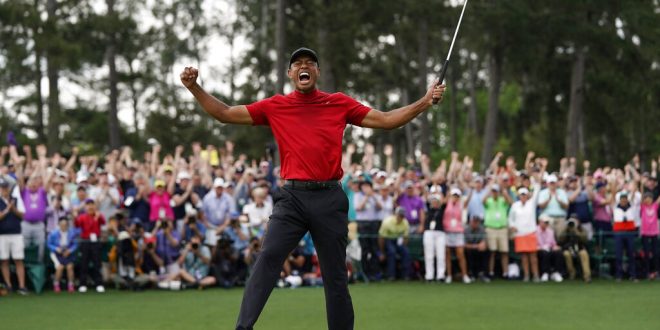 FILE - In this Sunday, April 14, 2019, file photo, Tiger Woods reacts as he wins the Masters golf tournament in Augusta, Ga. Woods goes for his next major on May 16 when the PGA Championship starts at Bethpage Black. (AP Photo/David J. Phillip, File)

Being played in May is not the only new thing for these competitors, however. This will be the first time that the PGA Championships have taken place at Bethpage Black Course in Long Island, New York.

In the two major tournaments held at Bethpage, the 2002 and 2009 U.S. Opens, only six players have finished under par, proving the course to be extremely difficult. This course will prove to make an exciting championship for 2019.

Coming off two strong wins at the 2018 Open Championship and 2018 PGA Championship, Woods won at the Masters to earn his 15th major championship win and first major win since 2008 at the U.S. Open. This would also be the first time that Woods is looking to capture multiple major titles in a single season since 2006.

Remember those six players that finished under par at Bethpage? Woods is one of them. He was the only player to finish below par in the 2002 U.S. Open at Bethpage Black. Although he does have the advantage of playing and winning, on the course before, this will be Wood’s first start since his win at the Masters.

This will be the first time without starts between majors since 2013 when he didn’t play between the U.S. Open and The Open Championship.

Johnson’s attack will surely help him at the lengthy Bethpage Black Course. He averages over 305 yards per drive, and this has allowed him to hit over 70 percent of greens in regulation this season, which results in a low-scoring average. Johnson is second on the PGA tour in scoring average and will be eager to win his second major title and his first Wanamaker Trophy.

McIlroy is arguably golf’s most consistent player right now. He is the number one golfer in strokes and eight top 10s in nine stroke-play events on the PGA Tour. He is a four-time major champion is aiming for his third PGA Championship win this week.

McIlroy won The Players Championship at TPC Sawgrass in March. He has only finished outside of the top 10 only twice in his 10 tournaments this season. This course could also be an advantage for McIlroy. Driving performance is the key to succeeding on this course, and that just so happens to be McIlroy’s strength.

Koepka will be the defending champion for the PGA Championship this year. He will also be coming off two straight wins at the 2017 and 2018 U.S. Opens. If he can continue his hot streak and hold onto his PGA Champion title, he could be the first player in golf history to hold concurrent back-to-back major titles.

After being sidelined from January to late April in 2018 and missing the 2018 Masters due to wrist surgery, Koepka is back and ready to compete. He already tied for second at last month’s Masters and is looking to keep winning.