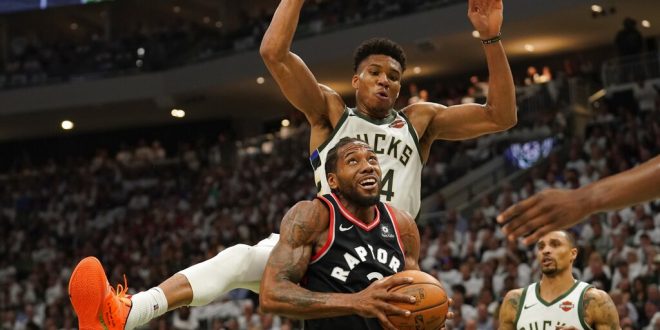 Toronto Raptors' Kawhi Leonard tries to shoot in front of Milwaukee Bucks' Giannis Antetokounmpo during the second half of Game 1 of the NBA Eastern Conference basketball playoff finals Wednesday, May 15, 2019, in Milwaukee. The Bucks won 108-100 to take a 1-0 lead in the series. (AP Photo/Morry Gash)

The Milwaukee Bucks host the Toronto Raptors in Game 2 of the Eastern Conference Finals tonight at 8:30 on TNT. Meanwhile, the Golden State Warriors who are up 2-0 in the series on the Portland Trailblazers head to Oregon for Game 3 at 9 PM this Saturday night.

NBA Conference Finals continue tonight for the East as the Raptors hope to correct their fourth-quarter struggles that cost them game one.

After a grueling 7 game series with the 76ers, expect Raptors Head Coach, Nick Nurse, to find time early in the game to rest his star players to avoid a repeat from game one.

The Milwaukee Bucks, on the other hand, have a chance to start the series 2-0 before traveling to Toronto.

Brook Lopez had a career-best post-season performance and team-high 29 points to go along with 11 rebounds in game one. Expect potential MVP candidate Giannis Antetokounmpo to continue his dominance in hopes of putting the Raptors in a hole early in the series.

Potentially heading to Toronto up two games will put the Raptors in an uncomfortable position that few teams have overcome. Only 20 teams have been able to claw their way back in a seven-game series down 2-0 in the history of the NBA.

On Saturday, the Portland Trail Blazers will host the Golden State Warriors for game 3.

In game 2, the Blazers suffered a loss that will be difficult to forget. They played nearly flawless against a team that offers little room for error. Hitting 18 3’s as a team.

Seth Curry hit 4-7 from the 3-point range while also adding 4 steals from his brother Steph. Portland’s Curry, like his brother, did not back down from the pressure when he hit a 3-pointer with just over a minute left to put the Blazers up one. Curry and Damian Lillard each played tremendously where everything seemed to go their way.

Mentioned earlier, starting a seven-game series down two is a task no team wants to overcome, but that is exactly where the Blazers stand. In order to take game three, the Blazers will need to replicate their shooting success from game two. In other words, Chef Curry missing a few shots could help.

The rumor that the Warriors are worse without Kevin Durant did nothing but improve the teams play without him. The team still left plenty to be desired even after coming away with the win.

Steph Curry, Klay Thompson, and Draymond Green took over the second half of game 2 in Durant’s absence. Curry led the team with 37 points while Green led the team with 10 rebounds to go with his 16 points, he finished 8-12 from the field.

With the news that Kevin Durant’s injury will keep him sidelined for at least the next two games, the Warriors will need to continue to prove people wrong by no depending on him.

All though they did just that in game 2, Steve Kerr knows his team needs to step it up with his best player on the sideline.

“We stole that game,” Coach Kerr said. He also added “I thought [Portland] outplayed us a majority of the night.” according to TheScore.

After an exciting game 2, fans can look forward to Seth and Steph going head-to-head again.