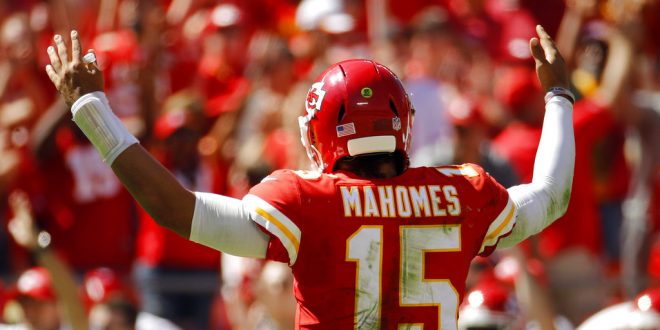 Patrick Mahomes’ talent was on full display during his sophomore season with the Kansas City Chiefs.  His incredible accuracy, arm strength, and innovation were seen in every game. His season ended earlier than he hoped but he was able to take home the MVP honors.

After throwing 50 touchdowns and eclipsing the 5,000 passing yards mark, Mahomes has his eyes set on the 2019 season.

Patrick Mahomes Growing With The Playbook

Mahomes tortured defenses every week in only his second season. Offensive minded head coach, Andy Reid, made it his goal to put more on Mahomes’ plate by adding to his playbook.  The possibility of Mahomes in a more diverse offense will keep opposing defensive coordinators up at night.

It will be interesting to see his encore from last year. In 2018, the Chiefs offense led the league in total yards and points per game. Mahomes understands that the regular season stats mean nothing if he isn’t the one hoisting the Lombardi. However, Mahomes understands that having a quarterback guru like Andy Ried by his side means that he is going to get challenged a lot.

In order to build off last seasons success, the Mahomes-led offense will need to keep opposing defenses on their heels and constantly guessing. After he proved himself capable of making any throw from any angle, Coach Reid will get more creative in year three. Preparing for the season starts with Mahomes only opponent being his own defense, a unit that has changed drastically since the AFC championship game.

Last season the Chiefs leaned heavily on the league’s number one offense, while the defense struggled for the most part. The Chiefs’ defense allowed 26.3 ppg and were ranked 24th in the league. They were also ranked 31st in yards allowed per game with 405.5.

Mahomes was standing on the sideline as the Patriots marched down the field in overtime during the AFC Championship game. This ended their hopes of going to Super Bowl LIII and forced the front office to make changes.

Enter new defensive coordinator Steve Spagnuolo, whos’ job right now is to improve the defensive playbook and cause as much frustration to Mahomes as possible in practice.

A true challenge from the defense is something Mahomes is enjoying during OTAs:

The Chiefs will send out a starting lineup in week one that is significantly different from 2018. Departures from household names Eric Berry, Justin Houston and Dee Ford left holes in a defense that can’t afford anymore.

Insert safety Tyrann Mathieu, defensive end Frank Clark, linebacker Darron Lee and rookie safety Juan Thornhill, and improvement might just be possible. This group of players has the potential to turn this defense woe around, and if you ask Mahomes, they are well on their way.