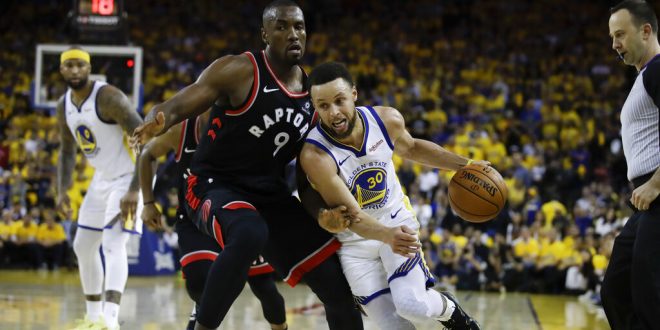 For the first time since 2015- the beginning of the three-championship reign of Golden State- the Warriors are trailing in Game 3 of a Finals series.

Last night’s Game 3 in Oakland ended 123-109, putting the Toronto Raptors in the lead of the series 2-1. The Warriors are used to constant dominance in any basketball situation. That is, when they have their all-star lineup.

Stephen Curry did his best to will the hobbled Warriors to a win last night. But the challenge facing Golden State was too much even for the two-time MVP. Even his playoff career-high 47 points couldn’t compensate for the Warrior talent that was missing from the court last night.

The Warriors were lost last night without their starting guard and best on-ball defender, Klay Thompson. Early in the 4th quarter of Game 2, Thompson suffered a hamstring injury when he landed awkwardly after a 3-point attempt. Despite, the Warriors went on to win the matchup 109-104.

The team, fans and even Thompson himself were hopeful he would be healthy enough to play in last night’s Game 3.

Minutes before tip-off, those hopes were crushed when Golden State ruled him out, eventually making him miss his first-ever post-season game in his career, snapping a streak of 120 appearances.

Warriors head coach Steve Kerr told reporters that the decision to keep Thompson out of Game 3 was an investment in the series.

Warrior’s big man Kevon Looney also remains on the bench indefinitely after suffering a collar bone fracture in Game 2 and will most likely sit out the rest of the series.

With a win in Game 2, the Warriors had a little more room to be cautious with Klay’s injury. Though, a loss as big as Thompson in a Finals matchup, forced the rest of the team to step-up.

Draymond Green says they didn’t come out in Oakland ready to lose.

Green stepped-up as the Warrior’s No.2 scorer for the game, putting up 17 points with seven rebounds, four assists and two steals. The only other Warrior to push double digits was Andre Iguodala with 11 points.

Steve Kerr said after Wednesday’s game that Thompson has been doing well the past couple of days. Now he has a couple more days to heal before Friday’s Game 4. According to The Athletic, Thompson is expected to return for Game 4.

Steve Kerr just told me that he expects Klay Thompson to play in Game 4 on Friday. Kerr said he doesn’t know yet about Kevin Durant’s status for that game.

Meanwhile, it’s been about a month since we’ve seen Kevin Durant on the court. The star forward has been out since he strained his right calf in Game 5 of their second-round series against the Rockets.

Although, before Wednesday’s game Kerr noted that the two-time MVP is doing better and better in workouts and is on track to participate in 3-on-3.

The Warriors are cautiously optimistic that they’ll have Durant back for Game 4 in the Oracle Arena, although he hasn’t played since his injury on May 8th.