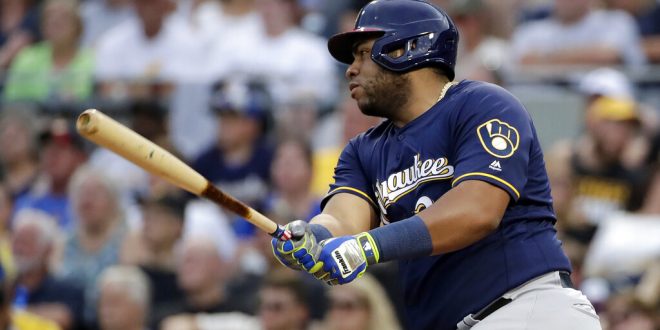 Milwaukee Brewers' Jesus Aguilar drives in a run with an RBI single off Pittsburgh Pirates starting pitcher Steven Brault during the fourth inning of a baseball game in Pittsburgh. The Milwaukee Brewers have traded slumping slugger Jesús Aguilar to the Tampa Bay Rays, a person familiar with the deal tells The Associated Press, Wednesday, July 31, 2019. The Brewers are getting right-handed reliever Jake Faria, according to multiple reports. (AP Photo/Gene J. Puskar, File)

The MLB trade deadline has passed. Apart from September call-ups and waiver claims, the rosters are set for the Tampa Bay Rays and the rest of the MLB.

The Rays didn’t win the deadline (that goes to the Astros for swinging Grienke at the buzzers), but they separated themselves from their fellow AL East contenders. How? They actually made trades today. And they weren’t the usual sellers as one would think. They definitely bought today.

Note: This article breaks down the three major trades that received the most media attention

The moves started a few days before the deadline when the Rays acquired INF Eric Sogard from the Toronto Blue Jays for two players to be named later on July 28th. Sogard doesn’t fit the big pickups the Rays need–he’s left-handed and not a pitcher–but he is still an upgrade.

Sogard has had a renaissance of a year with Toronto batting .300 with 10 home runs and 30 RBIs. A huge appeal of Sogard to the Rays was that he can play multiple positions as well. Sogard has started 355 games at second base, 91 at shortstop, 27 at third base, and seven games in the outfield. Now, of course, he likely won’t play most of these positions, but the Rays are in on the idea that he is an option almost anywhere.

Sogard appears to be a rental since he is a free agent after this season.

Another Former All-Star On the Squad

Moving onto the day of the deadline. The Rays picked up 2018 All-Star first baseman Jesus Aguilar (pictured above) from the Brewers in exchange for Jake Faria. Aguilar has not been able to repeat his 2018 numbers so far this season. However, has seen a recent return to form in the month of July. In July, Aguilar had a slash line of .298/.346/.574.

Rumors of interest in Aguilar started a few days before the deadline and this one actually came true.

The Rays have had success with another former All-Star following a down year in Avisail Gacia and look to benefit from a bounce-back second half from Aguilar. He will likely see time at first base and designated hitter.

Unlike Sogard, Aguilar has club control until 2023.

The unexpected twist of the trade deadline was the acquisition of reliever Nick Anderson and starting pitcher Trevor Richards from the Miami Marlins in exchange for opener Ryne Stanek and minor league outfielder Jesus Sanchez.

In the trade, the Rays added the pitching help they were seeking. However, most didn’t see it coming from Miami.

Anderson has posted a 3.92 ERA in his rookie season thus far. Advanced stats are more favorable to him as he has a 2.72 FIP (fielding independent pitching). Richards, in his second season, is 3-12 with a 4.50 ERA. His record may look a bit better if he had been pitching with a different team.

These trades seem small now, but so did Chris Archer for Tyler Glasnow and Austin Meadows at the time of the deadline.

It won’t be long before we’ll get to see if trades made in July helped the Rays in their hunt for October.

Harrison is a sports coordinator at ESPN 98.1 FM/850 AM WRUF. He served as a beat writer for Florida Gators football for the 2019 and 2020 seasons. He also contributes to WRUF's Gainesville Sports Center segments and makes appearances on the Clash on Harp on Sports. Harrison has been a content writer for WRUF since January 2019 as well.
@HarrisonSmaj
Previous Florida’s Secondary Has Potential For Elite Status
Next Astros’ Deadline Acquisition of Zack Greinke Shifts Power in American League