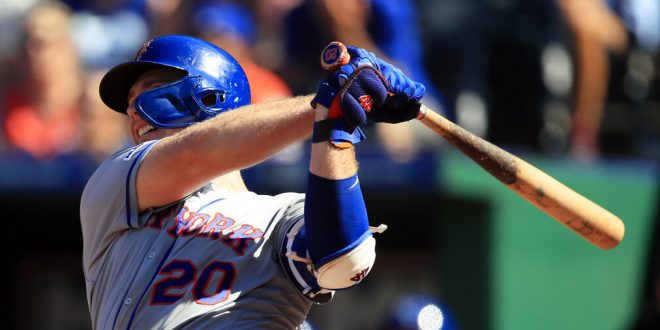 With one swing of the bat, Mets first baseman Pete Alonso made history.

Alonso cranked an 0-2 pitch from Kansas City Royals right-hander Jacob Barnes deep into the left field seats to surpass Bellinger in the 9th inning of an 11-5 Mets win. Following the home run, Alonso’s slash line sits at .271/.375/.604 in 123 games.

After the game, Alonso thanked the fans and reflected on his season up to this point.

“We have such a loyal and just awesome fanbase,” he said. “I can’t thank them enough for their support, and they’ve been a huge part of this kind of comeback in the nitty gritty part of the season.”

Alonso then transitioned to what he thought of his first year in the Major Leagues, and how he was unsure if he would crack the 25-man roster in spring training.

“It’s crazy,” he said. “I’ve just gotta go back to the days of spring training where I didn’t know if I was gonna make the team out of camp or not. I’m just extremely thankful for this opportunity. This has been such an incredible year; I just wanna keep building and helping this team win.”

Mets manager Mickey Callaway was ecstatic about the record as well. He made it a point to congratulate Alonso for his amazing feat in a post-game press conference.

“It’s great,” he said. “(Alonso) works so hard…he’s never gonna be satisfied. So, I’m sure he’ll continue what he’s doing, but it’s good to see. He’s such a hard worker, he cares about the team and he plays the game the right way.”

Alonso’s record-breaking rookie campaign has the Mets in wild card contention with 38 games left in the season. The Mets are currently 64-60 heading into Tuesday night’s home game against the Cleveland Indians.

As of Tuesday, New York is two games back in the wild card race. The team is tied with the Phillies, and it trails the Cubs and Nationals in the standings. New York is nine games behind the Atlanta Braves in the NL East.