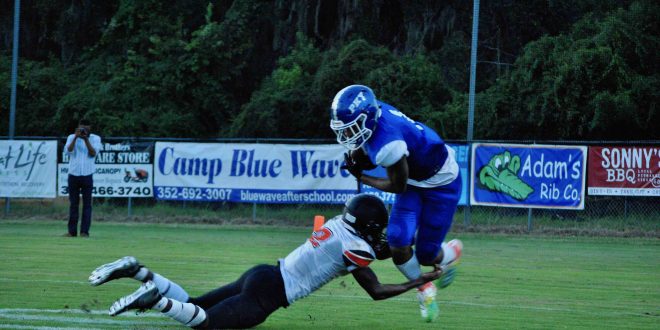 Wide receiver for PK Yonge, Jacobi Byrd carries the ball forward as Key'Shaun Williams hangs onto his legs to bring Byrd down.

Hawthorne Wins a Defensive Battle 14-7 Against P.K. Yonge to Start the Season 1-0

For the majority of the first half, few possessions by either team resulted in more than twenty yards and oftentimes ended with a turnover on downs or a punt. “Defense kept us in the game, they were definitely the better unit tonight. We’re young on offense and just starting to gel but we’re getting better,” senior for P.K. Yonge, Jacobi Byrd said.

However, by the end of the second quarter, Hawthorne was able to string together a series of first downs flipping the field position in their favor. With this new control, the Hornets were able to break through and put a touchdown on the board: senior quarterback Key’Shaun Williams scored with a three-yard rush to make the game 7-6 with a blocked extra point to follow and forty-one seconds remaining on the clock.

The first half was a hotly contested affair, with several big hits delivered by both defenses. One play, in particular, was when P.K. Yonge’s receiver Jontez Williams went down after the whistle was blown. “I liked the physicality a lot, they were a physical team but it makes me a better football player,” Williams said. Head Coach Marcus McDonald assured the rest of the staff and players at halftime that Williams was okay and had only had the wind knocked out of him.

After the half, Coach McDonald commented on the intensity of the game saying, “It’s a playoff atmosphere, and we have to win the battle of attrition.” In conjunction, Hawthorne’s Head Coach Cornelius Ingram, also related the game to being that of playoffs in spite of it only being the first of the season due to the support from the crowd, which was composed of over thirty families as well as student fans in the visitor’s section alone.

In the third quarter, P.K. Yonge came out aggressive delivering several hits on defense just as Hawthorne began escorting players off the field due to cramping and other injuries. However, this energy did not fully benefit the Blue Wave, as Coach McDonald explained, penalties ended many of their drives, “We penalized ourselves into giving up touchdowns and penalized ourselves out of touchdowns.”

Once again, in the fourth quarter, Hawthorne took control of the field position battle. Then after a lengthy drive late in the game, Hornets’ quarterback Key’Shaun Williams scored, running in the ball from three yards out, immediately following this with a two-point conversion making the score 14-7.

On the last drive of the game, Hawthorne caught a miscalculated pass from P.K. quarterback AJ Small only to receive two fifteen-yard penalties negated the interception, moving the Blue Wave up thirty yards to give them ideal field position with under a minute left. However, four plays later Hornets cornerback Key’Shaun Williams sprung in front of a Blue Wave receiver, resulting in another interception. “I saw the interception at the end of the game as redemption for the pick I had thrown earlier,” Williams said.

After time expired, both teams went their separate ways for team talks with their coaches and reflections on their transition from the second to the fourth quarter. During halftime, Athletic Director and Defensive Coordinator for Hawthorne, Dustin Atkins stressed to the players how they needed to keep their heads held high and power away through the rest of the game. “I think they really embodied this by the end of the game,” Atkins said, “They are young guys and needed this experience playing a long game that didn’t just end at halftime.”

Rylee is a second year Journalism major with a specialization in Sports and Media at the University of Florida College of Journalism and Communications.
Previous College Football Preview: Miami looks to upset Florida in marquee matchup
Next Buchholz Defeats Eastside in a Thriller