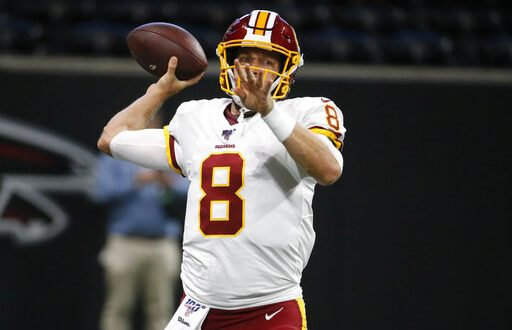 Washington Redskins quarterback Case Keenum (8) warms up before the first half an NFL preseason football game between the Atlanta Falcons and the Washington Redskins, Thursday, Aug. 22, 2019, in Atlanta. (AP Photo/Andrea Smith)

The decision to name Keenum Washington’s starter came down to his experience as a NFL starting quarterback, according to coach Gruden.

Keenum has seven seasons worth of experience in the league. This included an explosive season with the Minnesota Vikings in 2017. The Vikings experienced injuries to both quarterback Sam Bradford and quarterback Teddy Bridgewater early in the season, Keenum got his first start for Minnesota in Week 3 against the Tampa Bay Buccaneers.

Furthermore, Keenum led the Vikings to a 13-3 season and an appearance in the NFC Championship. Additionally, Keenum finished the season with a 98.3 quarterback rating, throwing for 3,547 yards and 22 touchdowns.

Last season with the Denver Broncos, Keenum threw for 3,890 yards, including 18 touchdowns and 15 interceptions. The Broncos finished the season 6-10 in the 2018 season.

In March, Washington acquired Keenum from the Broncos.

Injuries to McCoy and Smith

In 2018, Alex Smith won the starting quarterback role for Washington. In Week 11, Smith incurred an injury to his right leg that ended his season.

It is unclear when Smith will return to the field, but has spent time with the team throughout the preseason.

Last season, McCoy broke his fibula in Week 13 against the Philadelphia Eagles. McCoy returned to the field this preseason with speculation that he could win the starting quarterback role.

However, throughout the course of the preseason it became clear that McCoy’s injury was impacting his performance.

With injuries to both McCoy and Smith, Haskins will be Washington’s backup quarterback. Washington drafted Haskins 15th overall in the 2019 NFL Draft.

Haskins will get the start in Washington’s finale preseason game against the Baltimore Ravens. Coach Gruden stated that Haskins is, “one play away” from playing against Philadelphia.

In the preseason, Haskins has thrown for 305 yards, including one touchdown and two interceptions.

Lastly, Washington will open up their regular season against the Philadelphia Eagles on Sept. 8. Keenum stated that he is excited to be the Redskins starting quarterback and doesn’t take this opportunity lightly.