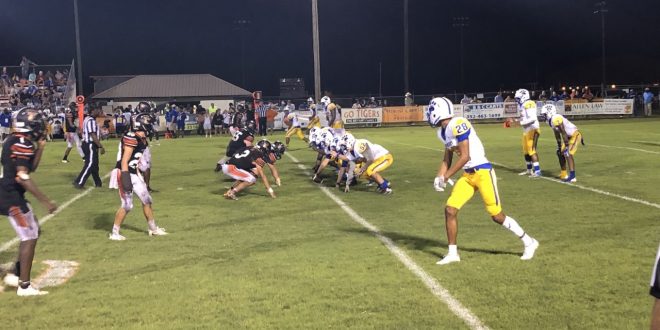 The Newberry offense had rolled against their previous opponents, including Trenton (pictured here). It was a different story Friday night against Chiefland.

Despite a Kobe Delima 63-yard touchdown run on the first play from scrimmage to put the Newberry Panthers up 6-0, this was a defensive battle for both sides.

Both teams were able to force errors and turnovers, but capitalizing on these issues was a struggle.

Newberry Panthers head coach Edward Johnson could not underestimate the value of his defense.

“That D is getting better and better every week,” Johnson said. “You put up zeros on defense, you can’t lose.”

Strong Defensive Plays by Both Sides

The first major defensive play was by Newberry’s Tyreke Williams.

After a 60-yard drive by Trenton in the first quarter that featured a fake punt for a first down, the Trenton QB fired to the endzone on third down from the 15. Williams jumped the route and ended the drive with an interception.

However, Trenton did well to prevent damage. They forced a fumble from Newberry QB Jaylen Zullo that gave Trenton the ball at the Panthers 45. The Tigers were forced to punt.

The second score of the game came on a Trenton safety that was a high snap over the QB, recovered in the endzone.

After this, neither side was able to put too much together on the offensive end.

Trenton was able to march down to the Newberry goal line on their first drive of the second half, but the Newberry defense stuffed four run plays from inside the seven to force a turnover on downs, and prevent Trenton from scoring any points again.

The epitome of struggle for Trenton came after they recovered a Newberry fumble at their own 49, only to turn it over again due to a second Tyreke Williams interception.

The undermanned sideline of Trenton seemed like it was bound to break as Newberry kept on pounding the ground as the game wore on.

In the fourth quarter, a controversial pass that was caught by a Newberry receiver and Trenton defensive back was compounded by a long run Laverne Woods that set Newberry up for their second score of the game, a Kobe Delima 5-yard carry to put the Panthers up 16-0 after the two-point conversion.

The combination of Delima and Woods added another score with 1:30 left in the final frame to produce the final score of 22-0.

Coach Johnson said having a running back duo like Delima and Woods is troubling for opposing defenses.

Both teams made unforced errors, such as losing possession of the ball as a result of high snaps.

Newberry head coach Johnson wants to continue to build on the run game but also said execution needs to improve.

“[The run game] is carrying us right now,” John said. “We have to make sure we take care of the ball on offense.”

The same could be said about Trenton, who did well throughout the majority of the game to slow down and force turnovers and errors from the Newberry offense.

Photos and contribution from Zachary Huber.

Originally from Seminole in the Tampa Bay area, Kyle is a contributor for ESPN Gainesville as well as local NPR and PBS affiliate WUFT. Kyle wants to get into sports with a lofty dream of being a sports broadcaster. He was raised playing soccer and baseball while watching hockey and football, so the knowledge about various sports is fairly extensive.
@KyleFanslerUF
Previous Oak Hall looks to overcome turnover problems in home opener against Bishop Snyder
Next Florida State Ties Up All-Time Series Record Against Florida