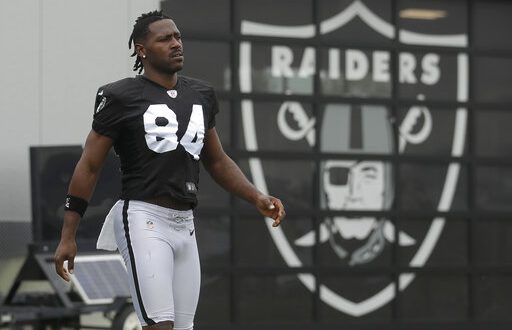 Antonio Brown Signs with Patriots after Release from Raiders

Antonio Brown has agreed to a one-year, $15 million deal with the New England Patriots, according to the NFL, plus a $9 million signing bonus. The deal came just a few hours after the Oakland Raiders announced his release from the team, making this Brown’s second team of the season already.

The news of Brown’s release came on Saturday with an announcement from the Raiders:

"I'm really proud of our players, our coaches, our owner, our front office. We did everything we could to make this work. … I wish Antonio nothing but the best." pic.twitter.com/eEpi4bv9i1

What led up to this moment? This deal with the Patriots has been in the making since Antonio Brown was traded to the Raiders in March. Brown had essentially burned all bridges with the Pittsburgh Steelers. Seemingly fine with never playing in the black and gold again, he signed a new contract with the Raiders. The Raiders exchanged a third and fifth round draft pick for Brown, restructuring his contract with the Steelers. Now guaranteed over $30 million, Brown made it to his second team of the season.

Here is our look into the life of @AB84, including a tour of his childhood neighborhood and a sit-down interview in his house to discuss his situation with the Steelers.

Everything seemed to be going the Raiders’ way now that Antonio was on the roster. They now had a solid wide receiver to really catapult the offense. This feeling didn’t last. Things got a little dicey when the NFL came for Brown’s helmet. It was reported that, during off-season training, Brown made attempts to sneak his old helmet into practice, hoping nobody would notice. Unfortunately for him, they did.

Fast forward into August, when the Raiders announced Antonio has placed on the non-football injury list. This was due to an incident involving improper footwear and a cryotherapy machine. Reportedly, the bottoms of his feet had been severely frostbitten, prohibiting him from participating in practices “indefinitely”. A lack of communication with the Raiders led to frustrations and speculations on the extent of the injuries. Brown was also threatening to never play ball for the Raiders if he didn’t get his old helmet back.

Moving into early September, it all just kept rolling downhill for Antonio Brown’s Raiders legacy. After getting into it with Mike Mayock, the Raider’s GM, and being threatened with suspension, the chaos was coming to a close. The final straw came when Brown posted a video to his Youtube channel including a phone call between him and head coach Jon Gruden. On Saturday Brown made a post to Instagram that said “You are gonna piss a lot of people off when you start doing what’s best for you.” In the caption, Brown made one request: “Release me @raiders”.

On Saturday the Raiders granted his wish and released the wide receiver, fining him over $250,000 and waiving his $29 million guarantees.

According to Brown’s agent, Drew Rosenhaus, there were numerous prospective teams for him to join, but he had his sights set on the Patriots early on.

Brown Wants To Be A Patriot

Hard to Compete With Patriots’ Offer

Signing with the Patriots

Not even a day later, Antonio Brown signed to the New England Patriots as their newest receiver.

Patriots’ quarterback, Tom Brady, says he is looking forward to practicing with Antonio and getting him up to speed with the rest of the team. Whether Antonio will be able to play nice with his new team is still up in the air.