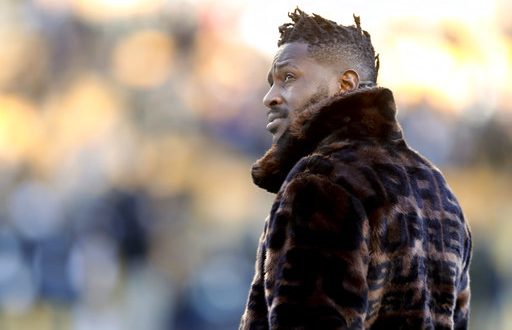 In this photo from Dec. 30, 2018, Pittsburgh Steelers wide receiver Antonio Brown stands on the sideline before an NFL football game against the Cincinnati Bengals, in Pittsburgh. Pittsburgh Steelers head coach Mike Tomlin says he's disappointed in the behavior of star wide receiver Antonio Brown but added the team has not received any formal trade request from Brown's camp. (AP Photo/Don Wright)

Just when we thought the Antonio Brown saga was coming to a close, it may have taken a turn for the worse.

After a very brief outing with the Oakland Raiders, which ended in Brown requesting he be released from Jon Gruden’s team, the former Pittsburgh Steeler found his new home in Foxborough with the New England Patriots. Just a day after inking his new contract, the six-time Pro-Bowler found his name on another legal document — a civil complaint that accused him of rape.

The New England Patriots now find themselves smack-dab in the middle of something ESPN’s Adam Schefter said they didn’t see coming.

Brown’s accuser, Britney Taylor, attended Central Michigan University, the same school as Brown, before finishing her gymnastics career at LSU. The two student-athletes initially met at a Fellowship of Christian Athletes meeting where they were bible study partners.

After graduating from LSU in 2013, Taylor opened her own gymnastics studio in Memphis, Tennessee. Taylor’Ed Gymnastics is home to over 50 young gymnasts mentored by Taylor.

In 2017, Brown reached out to Taylor to ask how she was. When Taylor enthusiastically told Brown of her plans for her gymnastics studio, Brown asked Taylor if she could train him. Specifically, Brown was looking to improve his flexibility and strength in his ankles. Taylor agreed and the two arranged meetings in Pittsburgh and South Florida — where Brown had homes.

In June of 2017, Taylor was staying with Brown on a training trip after she neglected to book a hotel. The first incident allegedly occurred as Taylor was getting dressed and Brown approached her while exposing himself. As Taylor exited the room, Brown forcefully kissed her.

Taylor then cut off all contact with Brown, who “fired” her over text.

Despite a failed attempt to reach Taylor in February of 2018, Brown reached out again asking if Taylor “hated him” according to court documents.  Brown went on to apologize for his actions and asked if Taylor would continue to train him — assuring her things would be different. Taylor agreed contingent on him providing her with a hotel room each weekend.

In April, Taylor returned to work for Brown, whose life was in “apparent chaos” after many people who previously worked for Brown had quit. Taylor continued to train Brown and was also tasked with booking Brown’s flights on the weekend.

This continued until on May 20, 2018, when Brown, Taylor and a couple of Brown’s friends went to Miami nightclub. The group left together in Brown’s rental car, driven by Taylor. While Taylor planned on dropping Brown and his friends off and heading straight to her hotel, she decided to use the restroom in Brown’s home.

Upon exiting the restroom, Brown allegedly grabbed Taylor by the arm and took her to his room to “have a talk.”

After a brief conversation, according to the lawsuit, Brown pinned Taylor face down on his bed where he proceeded to “forcibly” rape her.

“Devastated and disoriented”, Taylor ran into the foyer where she collapsed on the ground before driving her car to her hotel.

There’s two sides to every story

Antonio Brown’s lawyer, Darren Heitner, released a statement on behalf of Brown denying all allegations against him. According to Heitner’s statement, Brown was asked to invest $1.6 million towards Taylor’s business project. When Brown refused, Taylor supposedly cut off all communication with Brown. Heitner continues to assure that any sexual relationship between the two was consensual. Heitner’s statement also confirms that the two engaged in consensual sex after the night out in Miami.

Darren Heitner followed up the statement with a tweet reading, “Antonio Brown will leave no stone unturned and will aggressively defend himself, including exercising all of his rights in countersuits.” It seems as though Brown will look to countersue his accuser for civil extortion per ESPN’s Josina Anderson.

Source: #Patriots WR Antonio Brown intends to countersue his accuser for civil extortion, at this time.

Antonio Brown has yet to even dress out in a Patriots uniform. And with these new allegations, who knows if he ever will?

According to ESPN’s Adam Schefter, Brown may be subject to the Commissioner’s Exempt list, a status that allows Brown to be paid, but not take up a roster spot. Like the name indicates, the list is subject to special exceptions, as deemed by the NFL commissioner.

Regardless, Brown’s new home organization certainly has a decision to make in regards to the star wide receiver’s team status.

Ainslie is a journalism major at the University of Florida where she specializes in Sports Media. Her main passion is college football as it was a huge part of her childhood. Ainslie serves as a current correspondent for the Ocala Star-Banner, a newspaper for the Ocala, Florida area. She currently covers Marion County high school sports.
Previous AL Wild Card: Rays Win, Retain Lead
Next Christian Yelich Out For Season Due to Injury