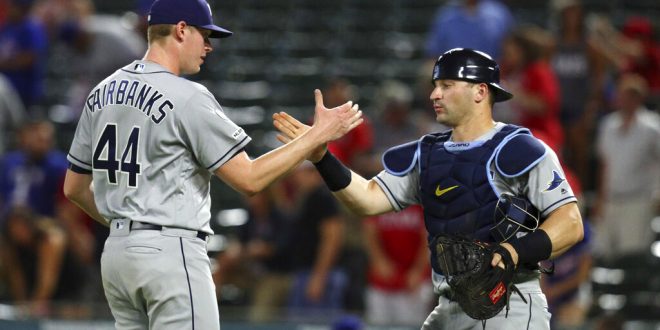 It took extra innings, but the Tampa Bay Rays got the job done against the Texas Rangers to retain a 1.5-game lead over the Oakland A’s in the AL Wild Card. The Rays have now won six straight.

The Rays gave up all three of their runs in the fourth inning. Ryan Yarbrough, who started the game for Tampa, began the inning by hitting Shin-Soo Choo. Then, Willie Calhoun hit an RBI-double into the left corner of Globe Life Park.

The trouble wouldn’t end there, as Nick Solak would step up and hit a high-flying homer to left field.

After the fourth, however, Yarbrough would find his groove once again. He’d end the night with seven innings pitched, three hits, three earned, one walk and seven strikeouts.

Overall, the Rays had 10 hits on the night. Austin Meadows had a good performance, going 1-3 at the plate with a two-run homer in the eighth and two walks. Joey Wendle also performed well, going 2-5 with a double and triple, one run and an RBI.

With Tuesday’s win over the Rangers, the Rays retained a 1.5-game lead over the A’s in the AL Wild Card. Oakland matched Tampa Bay’s result by lighting up the MLB-leading Astros 21-7.

Behind the A’s sit the Cleveland Indians at half of a game back. The Indians defeated the Angels 8-0 on Tuesday to keep the pressure mounted on the Rays and A’s. From there, the competition is greatly reduced. The Boston Red Sox sit at 9 games back from the A’s, and the Rangers sit at 13.5 games back.

With just 16 or 17 games remaining in the regular season, it’s very unlikely that anyone else will mount a large enough comeback to dethrone one of the above teams.