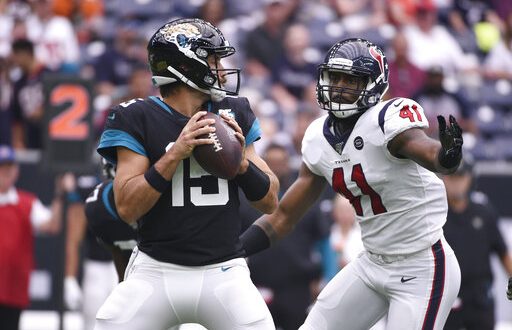 The Jacksonville Jaguars are still looking for their first win of the season ahead of tonight’s tilt against the Tennessee Titans on Thursday Night Football.

The team made headlines for all the wrong reasons this week. Star cornerback Jalen Ramsey requested a trade on Monday. Ramsey was seen getting into an argument with head coach Doug Marrone on the sidelines during Sunday’s 13-12 loss to the Houston Texans.

Ramsey is still going to start for the Jaguars tonight as the team explores trading the 2017 first-team All-Pro. The Jaguars will also likely have cornerback AJ Bouye return from injury.

For tonight’s game, #Jaguars CB A.J. Bouye is listed as questionable with a hip injury, but a source said he’s got a good shot to play. That means it should be Bouye and Jalen Ramsey as starting CBs, and it may be the last time.

On the offensive side of the ball, Gardner Minshew was serviceable in his first career start on Sunday. He completed 23 of 33 passes for 213 yards and a touchdown. The sixth-round pick from Washington State also picked up 56 yards on the ground on six carries. Minshew led a potential game-winning drive late in the fourth quarter that was capped off with a four-yard touchdown pass to wide receiver DJ Chark with 30 seconds left in the game. However, the Jaguars lost on a failed two-point conversion.

Jacksonville will need Minshew to continue to improve until starter Nick Foles returns from injury. Foles suffered a broken collarbone and won’t return for several weeks.

#Jaguars QB Nick Foles, who had a plate and screws inserted to fix his collarbone, should be back for Week 11. My story: https://t.co/ZsnJvae7y4

The Jaguars should also have plenty of opportunities to kick-start their rushing game to help out their rookie quarterback. The Titans are just 26th in the league in rushing yards allowed per game with 134.5. Jacksonville will likely be looking to get running back Leonard Fournette going early and often.

Jacksonville’s vaunted defense also has a good matchup against the Titans. A week after limiting Houston to 263 yards, the Jaguars will face a Titans offense that ranks 24th in yards per play (5.2) and 27th in yards per game (291). The Titans’ offensive line has also allowed eight sacks in two games, which creates another good matchup for a stacked Jaguars pass rush.

The Jags and Titans are kicking off on Thursday night at 8:20 p.m. ET.