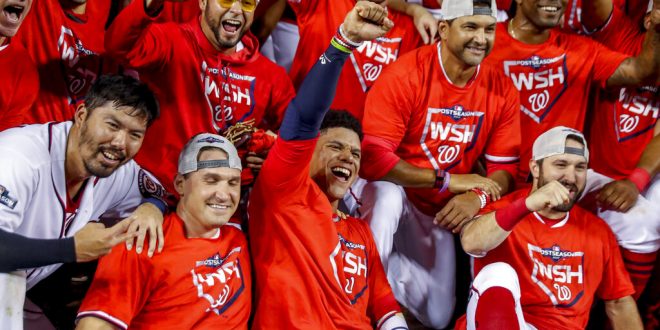 The Washington Nationals, including Juan Soto, center, pose for photographs on the pitcher's mound after defeating the Milwaukee Brewers 4-3 in a National League wild-card baseball game at Nationals Park, Tuesday, Oct. 1, 2019, in Washington. (AP Photo/Andrew Harnik)

The stage was set. The Washington Nationals and Milwaukee Brewers would kick off the MLB postseason in the NL Wild Card, where neither franchise had ever been. In the end, 20-year-old Juan Soto would make all the difference.

The Nats Take It

Things were looking pretty grim for Max Scherzer and the Nationals early on. After Trent Grisham walked to start the game, Yasmani Grandal smacked a two-run blast to right field.

Just one inning later, Scherzer gave up another long ball; this time, a solo homer to Eric Thames.

Stephen Strasburg came in for relief. The Brewers had no luck against Strasburg, as he went three innings, allowing just two hits and striking out four.

In the bottom of the eighth with Josh Hader on the mound, two outs and the bases juiced, Juan Soto came up to bat. This was his first-ever postseason game. So far on the night, he was 0-3. However, he got his first hit at just the right time.

Soto hit a base knock to right field, or so it should have been. Milwaukee’s Grisham failed to field the ball cleanly. It went right under his glove. As a result, all three runners would come around to score. The Brewers tagged Soto out between second and third to end the inning, but the damage was done.

Daniel Hudson picked up the save in the ninth to finish off the game and send the Nats to the NLDS against the LA Dodgers. Their series will begin Thursday at 8:37 p.m.

Nationals’ manager Dave Martinez was full of praise for Soto following the game.

Reflecting on his game-winning hit, Soto says that he wasn’t trying to “do too much.”

Grantham explains just what exactly went wrong on his error.

Prior to the start of the NLDS between the Nats and Dodgers, the Tampa Bay Rays and Oakland A’s will battle it out in the AL Wild Card Wednesday night. Tune into WRUF at 7:30 p.m. for live coverage.

Sports writer. Passionate about Premier League soccer, specifically Tottenham Hotspur.
@@JEricksonReport
Previous Josh Hammond and the Florida Offense Preparing for No. 7 Auburn Tigers
Next Out In the Wild: Rays Look To Survive Against A’s