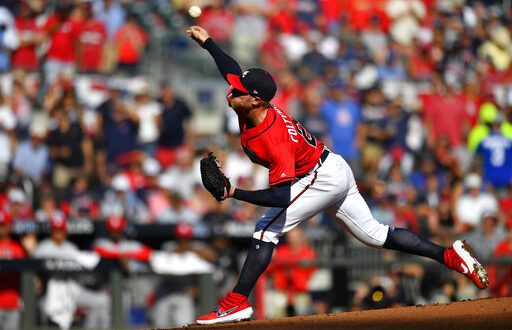 Braves looking for a tiebreaker at home against Cardinals

The Atlanta Braves will be hosting the St. Louis Cardinals in the final game of the National League Division Series.

The series is tied at 2-2 with Wednesday’s winner advancing to the National League Division Championship Series. The winner will meet either the Nationals or Dodgers.

If Atlanta were to win, it will be their first time going to the NLCS since 2001. However, the Cardinals last time in the NLCS was back in 2014. St. Louis has made the NLCS eight times since 2001.

The Braves lead the series 2-1 heading into game 4. That game went into extra innings and in the 10th Cardinal’s Yadier Molina hit a sacrifice fly to left field that brought in Kolten Wong to win the game 5-4 and force a game 5 against the Braves.

Cardinals will have right handed pitcher Jack Flaherty starting on the mound. Flaherty pitched in game two of the series, where he pitched through seven innings giving up eight hits and three earned runs.

Getting the start for the Braves will be Mike Foltynewicz, who got the win against Flaherty in game 2. Foltynewicz pitched through seven innings giving up three hits and no earned runs.

Left fielder Marcell Ozuna is leading the way for the Cardinals in the batters box. He’s put up eight hits, four runs and four RBIs in the post season. And Ozuna has a .471 batting average.

Center fielder Ronald Acuna Jr. also has eight hits but with only one run and two RBIs with a .500 batting average for the Braves. The Braves backup Left fielder Adam Duvall has also been doing good at the plate. He has three hits, two runs, and five RBIs with a .429 batting average and he’s only had seven at bats this post season.

First pitch for the Braves vs. Cardinals game is scheduled for 5:02 p.m. on Wednesday, Oct. 9.