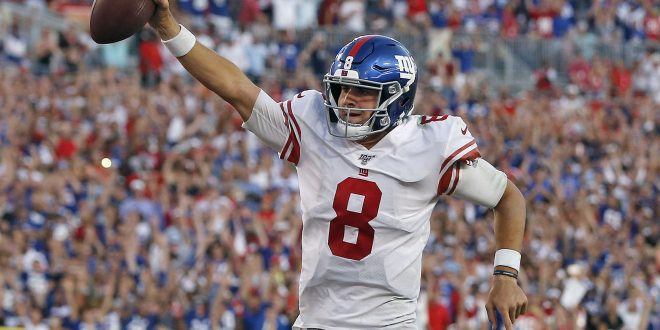 NFL Week Six Kicks Off With Pats and Giants

NFL action in Week Six kicks off with a former Super Bowl classic matchup of yesteryear.

The Patriots are currently at the top of the AFC East and have already beaten each of their division rivals one out of the two times they will compete this year.

The Giants sit second to last in the NFC East and have already lost to the Cowboys on the road.

Needless to say, these two have had some classics. Each of the last five games have been decided by 4 points or less.

The Patriots are riding a suffocating defense into a dominant campaign so far. The Patriot defense has only given up 31 points through 5 games this year and has forced 11 picks.

The offense has also posted at least 30 points in all but one game this year. Tom Brady is playing very “Brady-like.” The 42-year-old has put up over 1,400 yards, 10 TD’s and has only thrown 2 interceptions.

Here are highlights of the Pats victory versus the Redskins.

This Giants team has been a little different under Daniel Jones

Daniel Jones’ career with the Giants started out rocky.

The Quarterback that many assumed to be not worthy of the sixth overall selection was the second of his position off of the board in the 2019 NFL Draft. However, he played well in the preseason and eventually unseated Eli Manning as the Giants’ starter. Jones’ record as the starter is 2-1 with his first loss being last week versus the Minnesota Vikings.

Jones is looking like the only bright spot in what has been an injury-plagued season thus far. Starters Saquon Barkley, Sterling Shepard and Evan Engram are all out for the game tonight. These three players account for over half of the Giants’ total offensive production. Danny Dimes may need to do it all for the Giants to have a chance.

These two teams usually bring the best out in each other. Hopefully, this will make for another classic affair.

Both Fox and the NFL Network will be broadcasting tonight’s game on television.

All Thursday Night Games are streamed on Amazon Prime.