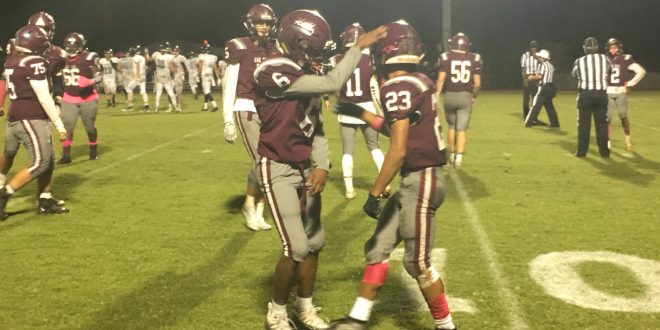 Two things would not stop during Oak Hall’s 49-14 throttling of Rocky Bayou Christian; the rain and the Eagles’ offense. The slippery conditions had little effect on Oak Hall. A balanced offensive attack resulted in three rushing touchdowns and three passing scores.

“It was a very complete game,” said Oak Hall head coach RJ Fuhr. “I was really pleasantly surprised as to how well we threw the football. It was a downpour most of the game.”

Fuhr made adjustments to the starting lineup in order to account for several Oak Hall starters who could not play.

“Jacarree Kelly, our starting receiver, was out,” Fuhr said. “When that happens, guys have to step up. They really did a great job.”

“They’re a tough team,” Fuhr said. They always are. This is my sixth time playing them and it’s always a battle.”

In the second quarter, Grabinger pulled down Oak Hall senior Zhai Smith, but hit his forehead on the ground in the process. The injury kept Grabinger out of the game and kept Rocky Bayou off of the scoreboard for the rest of the game.

“That made a big difference,” said Rocky Bayou head coach Josh Childers. “If Aaron was healthy, I think it would have been a closer game and hard-fought game all the way through.”

Gonzales makes impact on both sides of the ball

Sophomore quarterback Cole Gonzales scored in nearly every which way for Oak Hall. Gonzales added a rushing touchdown and interception return for a touchdown to his three passing touchdowns on the night.

“The coaching staff did a great job tonight of putting us in great situations,” Gonzales said.

Sophomore Ryan Nolan caught the most memorable catches of the night; his first came with penalty flags flying because of a defender draped over him. Nolan threw his hands up at the last second to make an incredible snag.

“Cole told me he was going to throw it back shoulder,” Nolan said. “It was under-thrown, so I just turned around and made a play.”

Later, Gonzales  connected with Nolan on a well-executed fade route. Nolan, twisting and turning, caught the ball at its highest point and landed in bounds for the score.

“I thought that was unbelievable,” Gonzales said. “I had complete faith in him all the way. Seeing the corners facing in, I knew my receivers would get by them and they were going to make a play for me.”

Oak Hall (6-2) has its last home game of the regular season against Maclay (6-1) next Friday. Maclay has two games next week; the first of which is a home game against Marianna (5-3) up in Tallahassee.

“It could have been a trap game with Maclay next week,” Fuhr said. “Our guys really hung in there and battled.”

@NevadaCullen
Previous Hawthorne Head Coach Cornelius Ingram Earns First Coaching Victory at Union County 27-12
Next Eastside High vs. Orange Park: A Messy Game in the Sky and on the Field As Rams Lose