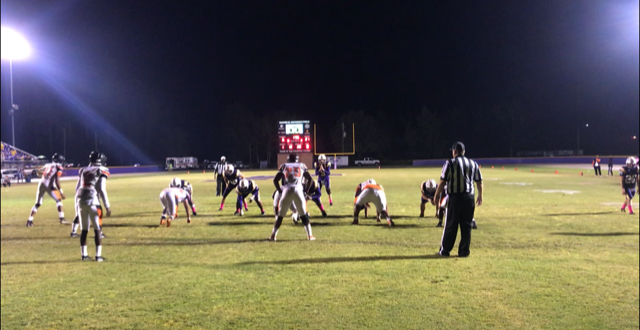 In Hawthorne head coach Cornelius Ingram’s first two trips to Lake Butler to take on Union County, the Hornets led at halftime by double digits, but lost. However, this time, they finished the job. Ingram said after the game that the message to his team at half was simple.  We’ve been here before. We’ve been up two touchdowns at halftime, and we gave the game away, so let’s refocus…let’s finish the game.”

On a rainy night with temperatures in the upper 60’s, the ground game was going to be important for both teams. Both teams tried to establish their rushing attacks early, but they both started the game with a three and out. On Union County’s second possession, running back Hosea Robinson plunged into the end zone after a time-consuming drive to get the scoring started.

Offensive explosion in the second quarter

Once the second quarter began, Hawthorne’s running game started clicking. Running back Jayquan Williams took a hand off 50 yards to the end zone to give Hawthorne the lead 7-6.

Jayquan Williams goes right up the middle for a touchdown, and the Hornets answer. Hawthorne now leads Union County 7-6 with 11:20 left in the second quarter. @ESPNGainesville @SunPreps @FlaHSFootball @ThePrepZone pic.twitter.com/q6pS58Bq54

The defense and special teams kept the field position in the Hornet’s favor for the entire second quarter, which helped set up Hawthorne’s next two scoring drives. After working the ball inside the Tigers red zone, quarterback Key’Shaun Williams juked his way through the defense on his way to the end zone to bring the Hawthorne lead to 14-6.

Once again, the defense for the Hornets made a play to set up their offense in the red zone nearing halftime. Dre Lawrence intercepted a Union County pass, and returned it to the Tigers 15 yard line. From there, Jayquan Williams scored his second touchdown of the night, and the Hornets took a 21-6 lead into halftime.

Tigers fight back in the second half

After forcing a quick three and out to open the second half, Union County’s offense went on a drive that ate up most of the clock in the third quarter. The Tigers were finally able to punch it in after almost 10 minutes went off the clock. Running back Hosea Robinson once again found pay dirt to bring the Tigers closer.

Hosea Robinson gets in for his second touchdown of the night. The score is now Hawthorne 21, Union County 12 with 1:11 left in the 3rd quarter. @ESPNGainesville @FlaHSFootball @SunPreps @ThePrepZone pic.twitter.com/kgKTYUi4cd

Hornets finish it off

Union County had a few more chances to get the game within one possession in the fourth quarter, but Hawthorne’s defense was able to get important stops when they needed them. A late touchdown by Key’Shaun Williams put the Hornets up 27-12, and the game out of reach for the Tigers. On that touchdown, running back Jayquan Williams delivered a punishing block that helped clear the path for Key’Shaun Williams to get into the end zone. Coach Ingram spoke about Jayquan Williams’ unselfishness on that play.

“He gave up his body for his teammate, and Key’Shaun was able to walk in to the end zone to put the icing on the cake,” he said.

With Hawthorne’s win tonight, they now move to 7-2 on the season. The Hornets will have a bye week next week, and then they will have Gadsden County in Hawthorne on Senior Night for the last game of the season on November first.