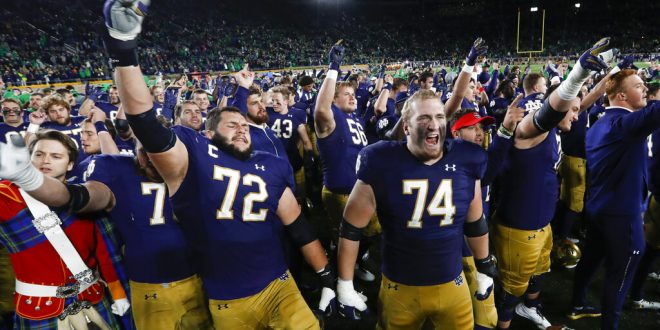 Another crucial top 25 showdown this week presents the No. 9 Notre Dame Fighting Irish at No. 19 Michigan Wolverines. Both teams have five wins on the season and will be fighting to stay in the top rankings.

Brian Kelly, Notre Dame`s head coach, commented on the importance and challenging factors going into the away game.

Both of the teams come into the game on Saturday averaging over 230 passing yards a game.

The Wolverines will rely on their top defense to shut down the Fighting Irish. The lack of defense may be the determinant of rankings as no team listed in the top 25 has three losses.

Khaleke Hudson leads the Michigan defense with 28 solo tackles and a total of 64 take downs. The senior returned for this years season after deciding against the draft. It is looking to be a smart decision as he is expected to top his season best of 77 tackles.

Coming off of a 276 yard game to No. 6 Penn State, Shea Patterson (Michigan`s quarterback) dominated the field. It was not enough to give Penn State the “L” but enough to leave Brian Kelly anxious about the possibilities and opportunities that he creates.

In combination with Nico Collins, the 6 foot 4 inch receiver, and Ronnie Bell, who combined with Collins had a total of 171 yards last week, Patterson has many big wideout options on where to throw the ball.

What Notre Dame needs to do

Notre Dame needs to hold Michigan on the ground to stay ahead on the scoreboard. Notre Dame`s stuffed USC at the line only allowing 86 yards from their star running back. The Fighting Irish also need to capitalize on offense this Saturday.

Throwing for only 165 yards last week, the senior Ian Book needs to spread the field and create more opportunities. If he wants to be a contender in the NFL draft, this is his time to shine. There will be no ranked games left in the season after Michigan so he needs to prove himself unless he plans to stay one more year. Book has 14 touchdowns with only 2 interceptions on the season.

Coach Brian Kelly, who is 0-2 at Michigan, remarked on the importance of the run game versus the dominant Michigan.

Where to find this crucial game

The ranked match-up will premier on October 26th on ABC at 7:30 PM. Michigan will host Notre Dame in Michigan Stadium in Ann Arbor.

Hey! I am a telecommunications major with a specialization in video production. I aspire to film documentaries with extreme athletes traveling around the world.
Previous Al Horford Opens The Season Against His Former Team
Next Top Ten Matchup in Death Valley