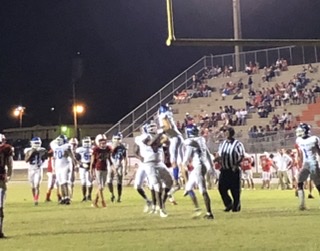 The P.K. Yonge Blue Wave got out to an early lead thanks to Jorgen Salazar’s back-to-back touchdown receptions. The first was a 40-yard pass from P.K. Yonge quarterback, Aaron Small Jr. The second came just two minutes later on a screen pass that Salazar took 30 yards into the end zone. The remainder of the first quarter was stagnant as both teams were held scoreless.

Williston’s offense found some success to open the second quarter. On 4th and short in the red zone, the Red Devils rolled the dice and converted on a run to the outside. Running back, Jacurtis Pitts, punched it in for a touchdown on the following play.

Pitts subsequently converted the two-point conversion to pull the Red Devils within a touchdown of the lead. P.K. Yonge put together a solid drive following Williston’s touchdown until Michael Reynolds’ stop on 3rd down forced the Blue Wave to punt. Pinned deep inside their own territory, Williston’s drive was salvaged by a personal foul on P.K. Yonge.

The Red Devils continued to drive across midfield, but they failed to convert on fourth down, and ultimately turned it back over to the Blue Wave. With little time remaining in the half, Aaron Small’s pass down the seam to Jorgen Salazar set up first and goal.

Aaron Small ran a quarterback draw on the next play for a touchdown. The Blue Wave faked the extra point attempt and converted the two-point conversion to take a comfortable 22-8 lead heading into the half.

After a nice return to start the second half, P.K. Yonge went three and out. Another excellent punt pinned the Red Devils down to their own two-yard line, where the Red Devils failed to regain any yardage.

The Blue Wave then led a 6 play, 42-yard touchdown drive capped off by an Isaiah Wilcox run. The point-after gave P.K. Yonge a commanding 29-8 lead with 6:19 remaining in the third quarter.

In an attempt to answer, Williston threw an interception. The ball was tipped into the air and caught by cornerback, Yarnell McCray. McCray returned the interception for a touchdown, extending P.K. Yonge’s lead to 36-8. With three minutes to go, Jacurtis Pitts scored his second rushing touchdown of the night and added the two-point conversion.

This cut P.K. Yonge’s lead down to 20 points, making it a three-possession game.

Williston’s hopes of a fourth-quarter comeback were quickly diminished by yet another Blue Wave touchdown. On 4th and 9, Aaron Small threw a touchdown to Cameron Pedro on a slant route.

Sophomore kicker, Alex Barnett, made his fifth extra point of the night to give P.K. Yonge a 43-16 lead. After an unsuccessful Williston drive, the Blue Wave ran out the clock to secure the victory.

P.K. Yonge improves to 3-6 for the season, while Williston falls to 1-8 on the year. Williston’s defensive struggles continued as their points allowed per game this season increased to 31.6.

Williston head coach, Ric Whittington, attributed this to a combination of P.K. Yonge’s offensive explosiveness and Williston’s poor defensive play. Despite the loss, Whittington had some positive takeaways from the game.

“We’ll take the hills, and we’ll look to build off of those…those high points in the game”, Whittington said.

Next week, Williston hosts their cross-town rival, Chiefland. Chiefland is 5-4 and should be well-rested coming off a bye. Whittington commented on the intensity of the matchup.

“It’s about going out there and playing against someone you love to hate”, he said.

As for P.K. Yonge, they look to build on their momentum as they return home to face a 7-2 South Sumpter team.

Hi, my name is Griffin Foll and I am currently a senior at UF studying sports media journalism with a concentration in political science. I contribute weekly web and radio content for WRUF ESPN Gainesville and help cover the World Cup/Champions League soccer beat. Be sure to check out some of my recent articles!
Previous Robert E. Lee clinches district title with win over Gainesville
Next Columbia Bounces Back With Rout at Middleburg 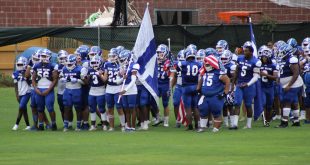 By: Austin Stirling, Jackson Reyes As the high school football playoffs near the end, the …