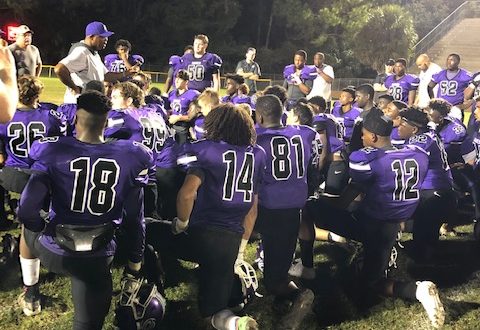 As the Gainesville Hurricanes formed a line and took the walk to midfield to meet the Robert E. Lee Generals postgame, they knew for at least a second time this season, they let one slip away from their hands.

Fast Start for the ‘Canes

Similar to the Buchholz game a few weeks back, Gainesville found itself with the lead early on against the Generals. Thanks in large part to the special teams and defensive side of the ball.

The Hurricanes’ special teams were able to force two Lee turnovers in the first half. A muffed punt by the Generals early in the first quarter resulted in Gainesville’s first touchdown of the night, as senior running back Kz Hutchinson ran it in to put the score at 7-0.

Special teams wreaked havoc once again when the Generals’ punt was blocked deep in their own territory resulting in a Hurricanes’ safety.

But this wasn’t the only side of the ball that came to play early for Gainesville. The defense also flexed its mussels often, not allowing Lee to get into any rhythm passing or running.

Generals’ head coach O.J. Small said after the game they were “very flat” in the first half and had too many miscues.

Gainesville went into the halftime locker room with a 12-7 lead. But once the second half started, it seemed as though the two teams traded places.

Lee’s defense began applying more pressure on Hurricanes’ senior quarterback Rod Williams and was able to intercept him twice in the half.

The Generals were able to grab their first lead of the night when junior wide receiver Cobie Bates broke free for a long touchdown run. After a successful 2-point conversion pass from sophomore quarterback Cale Zarah to junior wide receiver Timothy Gaallion, the game was tied up at 15-15.

Unfortunately for the ‘Canes, limited offensive success wasn’t the only thing hurting them in the second half. Penalties also began to play a role as well.

Just when it seemed Gainesville would break a big play and was getting in a groove offensively, a penalty would derail the drive.

Gainesville head coach Patrick Miller said, “we didn’t play four quarters” when referencing to how the team performed in the first half compared to the second half.

With just under 11 minutes to play in the fourth quarter, Lee junior safety Robert Simmons ultimately put the Hurricanes away after picking off Williams’ pass and returning it for a touchdown to put the score at 21-12.

The Hurricanes had their chances to win the game Friday night. Defense and special teams provided a spark early on. But, eventually, it came down to having too many self-inflicted mistakes.

For the Generals, they now gear up for the postseason after being crowned district champs, while Gainesville will look to finish the season strong as it faces rival Eastside in the season finale at 7:30 p.m.