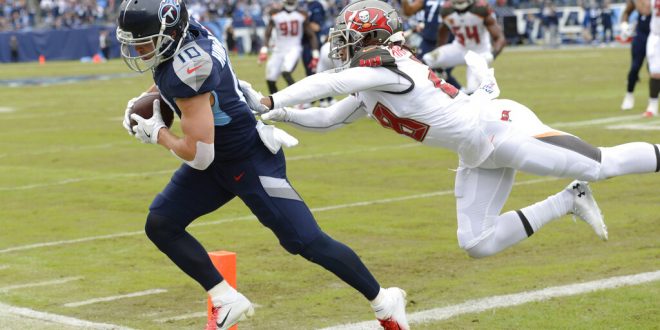 “Jameis Winston had four turnovers and threw away the Bucs’ chance at a win on Sunday.”

Winston did have two interceptions and two fumbles. However, after Sunday’s game, Arians was adamant that the picks weren’t Winston’s fault. He placed the blame entirely on another part of the offense.

Regardless, the 27-23 loss was the third straight for the now 2-5 Bucs following an interception-filled game against the Panthers two weeks ago. Winston had five interceptions in the game against Carolina.

Turning Tides for the Titans

The Tennessee Titans improved to 4-4 with the win. Despite struggling offensively at times, the Titan offense made good use of the turnovers their defense handed them.

QB Ryan Tannehill remained undefeated in his second start for the Titans. Tannehill sealed the win with a red zone touchdown, tossing an 8-yard pass to A.J. Brown with just under seven minutes to play in the fourth quarter.

Tannehill said the offense needs to improve, but that he was proud of the team’s play in the red zone. He also gave credit to the defense for the opportunities it created.

It wasn’t only the Buccaneers’ turnovers that gave the Titans the edge. The Buccaneers were able to force a fumble on a fake punt attempt by Tennessee with 3:41 left in the fourth quarter but weren’t given the chance to capitalize on it. Linebacker Devin White knocked the ball away from Brett Kern, and Andrew Adams grabbed it for what looked to be a sure scoop-and-score for the Bucs. But an inadvertent whistle from the referees brought players to a stop. The touchdown would’ve given Tampa Bay the lead.

Arians was frustrated with the loss. If the Titans’ defense helped win Tennessee the game, then the Bucs’ defense might’ve lost it for Tampa Bay.

The Buccaneers will head to Seattle next Sunday to play the Seahawks (6-2). The Titans will play the Panthers (4-3).