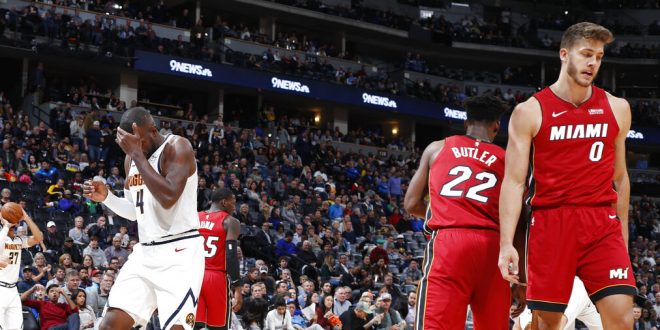 Denver Nuggets forward Paul Millsap, left, reacts after getting hit in the head while driving the lane against the Miami Heat in the second half of an NBA basketball game Tuesday, Nov. 5, 2019, in Denver. The Nuggets won 109-89. Millsap made his two foul shots and then left the game. (AP Photo/David Zalubowski)

The Miami Heat are still on top of the Southeast Division after falling to the Denver Nuggets 109-89 on Tuesday night.

Both teams are now 5-2 with the Nuggets sitting atop of the Northeast Division.

At half time the Nuggets had a 10 point lead. They were able to keep the lead, scoring thirty-one points in the third before they finished with a twenty point lead.

The Heat was only able to make 36% of their field goals, while the Nuggets made 52%.

Twenty-two-year-old, Jamal Murray, was the leading scorer for the Nuggets on the court last night. Murray put up twenty-one points. Furthermore, he registered five rebounds and four assists.

Will Barton and Jerami Grant put 15 points a piece on the board.

For the Heat, Jimmy Butler shot the most points with 16. Heat rookie, Kendrick Nunn, started the season out hot, but has struggled to score in the past two games. He only scored eleven points on the Nuggets and five against the Rockets in the game before.

Thoughts After The Game

The Heat’s Goran Dragic had seven assists and scored nine points. Dragic said after the game that a big reason the Heat struggled was that they aloud the Nuggets to get open far too easily.

"It was a tough game for us, but it's a good game to learn from." Hear from Goran Dragic on what the team can takeaway from tonight's loss.#HEATTwitter #NBA pic.twitter.com/LyPz5K8GvK

Miami’s head coach, Erik Spoelstra, reiterated what Dragic said about the Nuggets offense being too much for them. Especially, with Murray having such a good night.

The Heat will be looking to regroup after the tough loss. As one fan pointed out there’s a lot of basketball left to be played this season.

The Miami Heat play the Phoenix Suns Thursday at 9 p.m. and the Nuggets will be hosting Philadelphia 76ers on Friday at 9 p.m.