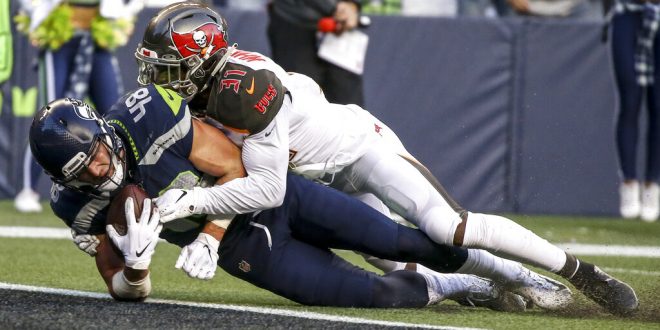 The Bucs are coming off an overtime loss against the Seahawks last Sunday.

The Cardinals are also coming off of a loss, but theirs was against the 49ers in regulation.

Both Teams Have Struggled

Four of the Bucs’ six losses this season have been by seven points or less. The Bucs have under-performed this year, but it’s not all because of Jameis Winston and the offense. The offense is what has kept the Bucs in games all season, but the defense has not gotten the job done.

The Cardinals are a different story but have netted similar results this year. The Cardinals started out poorly with a tie and three straight losses, but then rattled off three straight wins. They looked to be turning it around, but couldn’t continue their hot streak against the Saints and 49ers, two of the best teams in the NFL.

The Buccaneers are coming off a game that they had a chance to win in Seattle last week. They took the then 6-2 Seahawks into OT tied 34 all, but the defense couldn’t stop Wilson and the Hawks’ offense all game, and that continued into OT.

Jameis Winston is moving on:

The Seahawks won the OT coin-toss, and proceeded to march down the field on 10 plays in three minutes and 38 seconds.

Jameis Winston threw for 335 yards on 29 of 44 completions with two touchdowns and no interceptions against one of the worst pass defenses in the NFL.

On Sunday, Winston will look to do more of the same against a pass defense that has given up 24 touchdowns, the most in the NFL this season.

Like any QB, Jameis Winston likes throwing against bad pass defenses. He will look to target Mike Evans and Chris Godwin often, which is nothing out of the norm. Evans is coming into Sunday off of 198 and 180 receiving yard performances, where he had 11 and 12 receptions respectively.

Godwin has had a solid year thus far as well but has had down games the past two weeks. In the first six games of the season, Godwin had four performances of 121 or more yards, the best of which he had 172 yards.

If he targets both Evans and Godwin heavily, it could be a big win for the Buccaneers.

Though the Bucs are winless at home, they have the matchup advantage against the Cards’ new-look rushing offense featuring Kenyan Drake and number one running back David Johnson back from injury.

While the Cardinals’ run game is good, it may not be against one of the better run defenses in the NFL. If the Cardinals are going to win, they’ll likely have to rely on Kyler Murray to get the ball to his receivers.

The Bucs’ pass defense needs to show up for them to get the job done. That, combined with a good offensive performance, should grant them their first home win of the season and their third win overall.

Watch Winston and the Bucs try to take down Murray and the Cards this Sunday at 1 p.m. on FOX.

My name is Caleb Mikita, and I am a telecommunications major at the University of Florida from St. Pete, FL. I am a fan of all things sports, but my main passion is baseball. My long term goal is to become a sports analyst or writer for MLB Network.
@@caleb_mikita8
Previous Miami Seeks Second Win of the Season Against Colts
Next Columbia Football’s USF Trio on Commitments and Playoffs