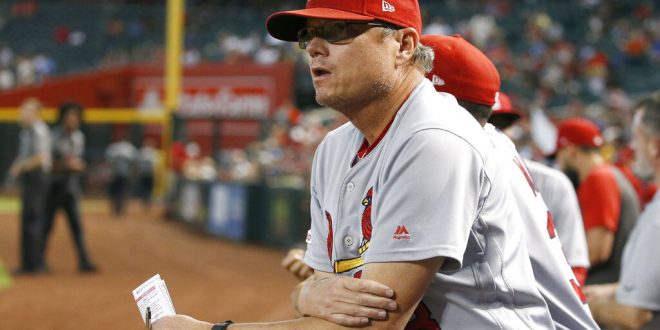 FILE - In this Sept. 25, 2019, file photo, St. Louis Cardinals manager Mike Shildt pauses in the dugout during the fifth inning of the team's baseball game against the Arizona Diamondbacks in Phoenix. Shildt has edged out Craig Counsell of the Milwaukee Brewers to win NL Manager of the Year. (AP Photo/Ross D. Franklin, File)

MLB manager of the year awards

Rocco Baldelli of the Minnesota Twins and Mike Shildt of the St. Louis Cardinals claimed the 2019 Manager of the year honors for the American League and National League respectively.

Shildt was named interim manager for the team after the Cardinals fired Mike Matheny 93 games into the 2018 season. He became the first manager to ever win the award without having any prior playing experience.

The North Carolina native led the Cardinals to a 91-71 record in 2019, winning the National League Central. The Cardinals also reached the postseason for the first time last season since 2015. Furthermore, The team went on to beat the Braves in a decisive fifth game in the National League Division Series. But their season ended after being swept out of the NLCS by the Nationals.

Shildt is the Cardinal’s third manager in history to earn this honor. Previously, Whitney Herzog was named Manager of the Year in 1985 and Tony La Russa won the award in 2002.

Shildt said that this award is not about him but about an award for his team and his players.

Rocco Baldelli and the Minnesota Twins

At age 38, Baldelli is the youngest manager to win the Managers of the Year award. He’s also the eight rookie manager to achieve this feat. He led the Twins to a 101-61 record in his first season.

Baldelli said his first year was challenging yet rewarding without having much experience as manager.

Baldelli finished with the same amount of first-place votes as New York Yankees manager, Aaron Boone. But it was the Twins manager who won the honor after receiving more second-place votes from the Baseball Writers’ Association.

The Twins’ series came to an end after the New York Yankees swept them in the American League Division Series.

Baledelli is humbled by this award and credits his team.