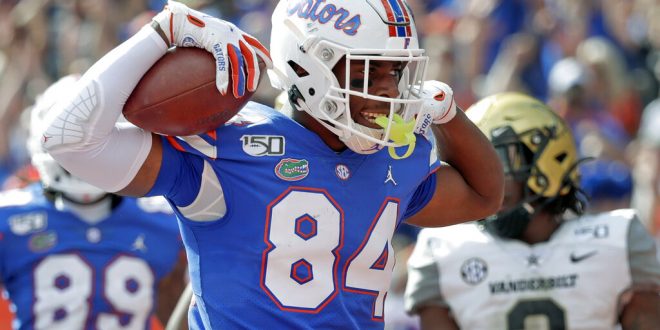 The Florida Gators showed out and unleashed their potential on Saturday when they faced and conquered the Vanderbilt Commodores in Ben Hill Griffin Stadium.

While this feat should not go unnoticed, what stands out to me is the vast opportunities and wide receivers Dan Mullen has in the program. Game changers spread all the way down from the starters to their second and third lines.

Florida’s depth, not only in receivers, has lead to their success. Perched around the top 10 in the rankings, Florida has succeeded by giving players valuable rest time and not targeting the same athletes play after play.

In other words, this wears out the defense at a faster rate and creates more opportunities for breakout plays.

As of now, the squad has five players out on injuries and three questionable for play. More importantly, players being ready to step up was at a high. This did not hinder down the Gators as they stampeded over Vandy.

Looking at the stats

Florida has 16 different players on the season that have received a pass. Alabama Crimson tide has 12.

The team averages 266 passing yards per game with 26 receiving touchdowns on the season.

Kyle Pitts is Florida`s most targeted player with 42 receptions and 528 yards on the season.

Florida has seven players with over 200 receiving yards and three with over 400 yards on the season.

Freddie Swain and Kyle Pitts lead the team and are tied with five receiving touchdowns.

Lamical Perine is a dual threat with 110 rushing attempts along with 28 receptions on the season.

Florida targeted 11 unique receivers in their 56-0 win versus Vanderbilt.

The Florida offense spreads the ball out which creates opportunities.

The substantial amount of viable receivers does not allow competitors to focus thoroughly on one player but forces them to cover many.

Florida’s O-line has protected and unleashed Kyle Trask to have valuable time to ensure he doesn’t force the ball.  For instance, he is able to set his feat and put the ball in spots that only our receivers can get it.

Through injuries, the offense has prevailed with the help of their depth.

The Florida`s offense is set up as a receiver’s paradise.

No. 11 Florida faces Missouri as the last SEC game in their schedule. The Gators come into the match 8-2, and the Tiger enter 5-4.

The matchup to set to play in Memorial Stadium/Faurot Field on Saturday, 11/16.

Hey! I am a telecommunications major with a specialization in video production. I aspire to film documentaries with extreme athletes traveling around the world.
Previous MLB manager of the year awards
Next Commodores look to make Kentucky Wildcats last in SEC East