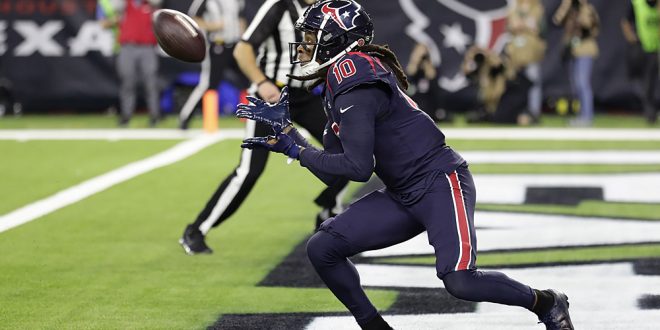 Houston Texans wide receiver DeAndre Hopkins (10) makes a catch for a touchdown against the Indianapolis Colts during the first half of an NFL football game Thursday, Nov. 21, 2019, in Houston. (AP Photo/Mike Marshall)

Texans Round-Up A Win Against Colts

The Houston Texans (7-4) round-up a win against the Indianapolis Colts (6-5) on Thursday Night Football.

The win moves the Texans up to the number one spot in the AFC South.

After an embarrassing loss against the Ravens last weekend, the Texans rounded up the team against the Colts to defeat them in a close divisional game.

Wide receiver DeAndre Hopkins also had a big night, scoring two crucial touchdowns at the start and end of the game. With no scores from either team in the first quarter, the Texans were the first to put a score on the board at the start of the second with a field goal from Ka’imi Fairbairn.

The Colts soon answered with a touchdown from quarterback Jacoby Brissett. Eventually, near the end of the second, Hopkins scored on a 35-yard pass from Watson to close the gap. Indianapolis tied the game, 10-10, with a field goal with seconds to spare.

After the half, the Colts put another six on the board with a good PAT, placing them in the lead, 17-10. Still a close game, the Texans couldn’t convert on third down, so they brought Fairbairn once again to start closing the gap.

The last crucial play from the Texans came quickly at the beginning of the fourth quarter. With Watson utilizing his receivers on the field, they moved quickly down the gridiron. This ultimately set up Hopkins to receive a pass from Watson for 30 yards and score what would ultimately become the game-winning touchdown.

Texans defense went to work in the last quarter, making sure the Colts had no more opportunities to get a touchdown or a field goal. On the last Colts drive, Brissett attempted to rush the ball for the first but was short one yard handing the ball over to the Texans for the last drive of the game.

The Colts will host the Tennessee Titans on Dec. 1 at 1 p.m.

The Texans will host the England Patriots on Dec. 1 for a Sunday Night Football game.

I am a fifth-year journalism major, specializing in sports and media. My favorite sport to watch and cover are college and NFL football. When I'm not doing that, I enjoy hanging out with my cat, going to concerts and traveling.
@sportsabrina
Previous Perine Made the Most of His Chances
Next Bucks Off to Hot Start 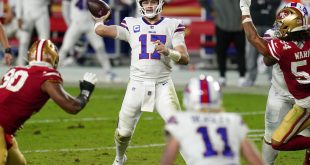 Saturday, Josh Allen and the Buffalo Bills match up against Lamar Jackson and the Baltimore …