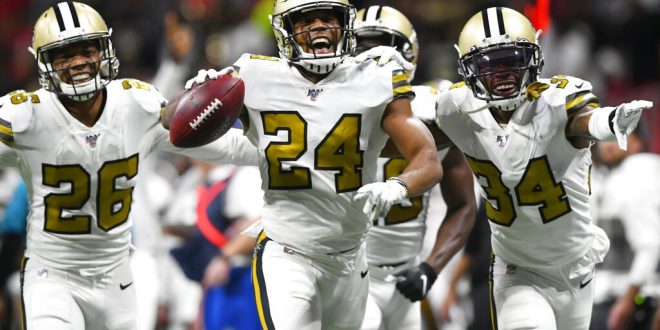 New Orleans Saints strong safety Vonn Bell (24) celebrates with teammates after his interception against the Atlanta Falcons during the second half of an NFL football game, Thursday, Nov. 28, 2019, in Atlanta. (AP Photo/John Amis)

With four weeks left in the NFL regular season, the NFC playoff picture is becoming clearer.

As of Week 13, the New Orleans lead the conference and clinched the NFC South. In the NFC West, the Seattle Seahawks have a growing advantage over the San Francisco 49ers.

The Green Bay Packers remain undefeated against NFC North opponents, giving them the lead over the Minnesota Vikings. With a 6-6 record, the Dallas Cowboys sit atop the NFC East.

After the Dallas Cowboys Thanksgiving Day loss to the Buffalo Bills, the NFC East division leader has yet to beat a team above .500. Although the Cowboys have struggled against opponents, they remain perfect against division opponents.

Despite the Cowboys average record, quarterback Dak Prescott has proven to be the real star in Dallas. Furthermore, Prescott leads the league in passing yards with 3, 788 while also holding a passer rating of 99.8.

The Philadelphia Eagles remain in the hut for a spot in the NFC playoff picture. To remain a division leader contender, the Eagles have a must win game against the New York Giants in primetime on Monday night.

A Dallas loss to the Chicago Bears on Thursday night and an Eagles win a division opponent would put pressure on the Cowboys.

Former NFL linebacker Willie McGinest commented on the pressure surrounding both the Cowboys and the Eagles.

The Green Bay Packers remain the top team in the NFC North while also holding onto to a 3-0 division record. With Minnesota losing two divisional games, the Packers are in a good position to take the division.

Minnesota is predicted to be a contender for the NFC Wild Card spot but must face all of their division opponents before finishing the season.

The Bears remain in the hunt for a playoff spot but will go head to head with the Vikings this Sunday. A Chicago win could shake up the Wild Card standings and further the potential for a Bears playoff appearance.

The Saints have clinched the NFC South but face a tough opponent against the San Francisco 49ers on Sunday. The Saints lead the NFC with a 8-2 conference record, with losses to the Falcons and the Seahawks.

The Tampa Buccaneers and Carolina Panthers remain in playoff contention, but likely won’t take the lead of the division.

After defeating San Francisco 27-24 in overtime of their Week 10 meeting, the Seahawks hold a slight advantage over the 49ers. Furthermore, the Seahawks are likely to take the division but the 49ers remain in serious playoff contention.

In order for the Seattle to secure the division they will need to defeat the Los Angeles Rams on Sunday night.

According to NFL Network Insider Ian Rapoport, the 49ers can gain a playoff appearance with two scenarios. The 49ers are in control of their playoff appearance, but will likely need assistance from the Los Angeles Rams.

McGinest states Seattle is a team that is peaking at the right time and ready for playoff football.