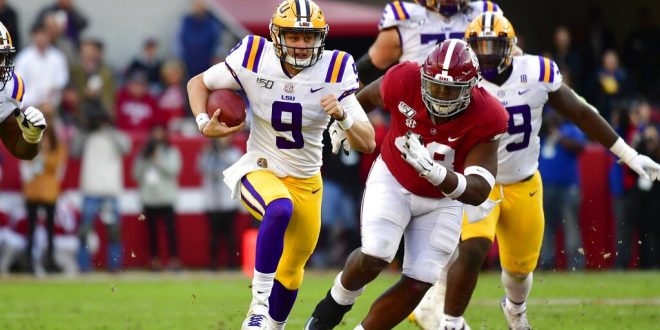 For the fifth straight week, the College Football Playoff Committee congregated in Texas to re-evaluate the top teams in college football. While there was no movement near the top, what happened outside of the Top-4 was the talk of Tuesday night.

In the eyes of the committee, Ohio State remains the best football team in the country. Last weekend, Ryan Day’s Buckeyes beat “the team up north” in convincing fashion. Dropping to 0-5 as Michigan’s head coach, Jim Harbaugh and the Wolverines were thumped by the rivaling Buckeyes 56-27.

In the land of the SEC, LSU had quite the game as they tore into Texas A&M in a 50-7 stomping. Joe Burrow and the Tigers’ offense continue to heed the approval of the committee. This week, Ed Orgeron’s Tigers landed at the No. 2 spot for the second week in a row.

Despite the griping from Clemson’s Dabo Swinney, the other set of Tigers remain stuck at No. 3. Coming off of a 38-3 win over in-state rival South Carolina, Swinney and his 12-0 record continue to challenge the committee’s alleged loyalty to the SEC:

"Georgia loses to this very same team & the very next day it's 'How do we keep Georgia in it?' We win to the team that beat South Carolina & it's 'How do we get Clemson out?'"
– Dabo Swinney pic.twitter.com/TmXMDtCTMi

And rounding out the top-four is the same team Swinney refers to in his argument: the Georgia Bulldogs.

Kirby Smart and his 11-1 Dawgs cap off the playoff picture after a win in Bobby Dodd Stadium in Atlanta. The Bulldogs out-muscled the Georgia Tech Yellow Jackets 52-7. Jake Fromm threw for 254 yards and four touchdowns in Georgia’s win over the Yellow Jackets.

On the outside looking in

The Utah Utes are the first group of guys currently out of the playoff picture at the No. 5 spot. Kyle Whittingham’s 11-1 PAC-12 team has the committee impressed. The Utes’ running back, Zack Moss, continues to roll over opponents with 1,242 rushing yards on the season. The good news for Whittingham’s team is that in four of the last five football seasons, the No. 5 team going into Championship Week has made it to the playoff. All the Utes have to do is get past No. 13 Oregon.

A pair of Big 12 teams battle for the No. 6 and No. 7 slot as Oklahoma and Baylor take their respective seats. The No. 6 Sooners are coming off of a 34-16 win over No. 25 Oklahoma State. Conversely, the Baylor Bears are coming off of an attractive 61-6 win over Kansas. These two teams will meet in Arlington, Texas for the Big 12 conference championship this Saturday at noon. However, these two teams will be playing for much more than a conference title.

Following yet another instant-classic-of-an-Iron-Bowl, Gus Malzahn and Auburn came away with a statement win on Rivalry Week. At the mercy of another missed field goal in the Iron Bowl, Nick Saban’s Crimson Tide dropped a 48-45 loss to the Auburn Tigers. The result? Skidding seven spots down to No. 12. This is the first time in four years that Alabama is out of the Top-5.

Alabama falls to No. 12 in the #CFBPlayoff rankings.

That's their worst ranking in the CFP era. pic.twitter.com/SZTsYQ406q

Ainslie is a journalism major at the University of Florida where she specializes in Sports Media. Her main passion is college football as it was a huge part of her childhood. Ainslie serves as a current correspondent for the Ocala Star-Banner, a newspaper for the Ocala, Florida area. She currently covers Marion County high school sports.
Previous NFC playoff picture coming into focus
Next Fultz scores career-high in Magic win