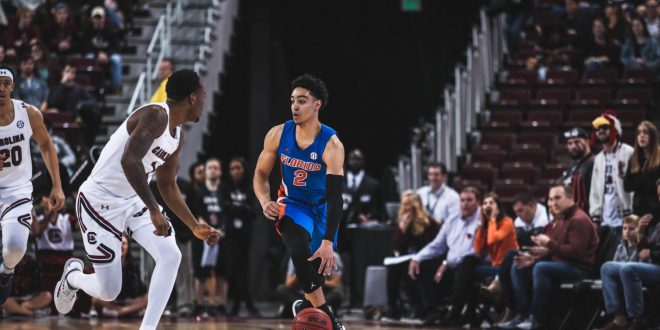 A busy night for SEC basketball

This Gator versus Gamecock battle took us to Colonial Life Arena in Columbia, South Carolina. The game ended with a final score of Florida 81, South Carolina 68. This win pushed Florida to a 2-0 record in the SEC.

The most notable highlight from this game was sophomore Andrew Nembhard’s performance. The point guard earned the first double-double of his career with 21 points and 10 assists in the game.

The Volunteers and the Tigers faced off in the Mizzou Arena in Columbia, Missouri. Tennessee took the win in this one, topping Missouri 69-59. The Vols extended their conference record to 1-1 while the Tigers fell to 0-2.

The Stegeman Coliseum in Athens, Georgia, witnessed a Kentucky triumph over Georgia. Although the No. 14 Wildcats were predicted to win, the fight was tougher than expected. The Bulldogs went into the second half on top 37-31.

Despite an admirable effort by Georgia led by freshman guard Anthony Edwards’ 23 points, Kentucky prevailed 78-69 in the end. The Wildcats extended their SEC record to 2-0 while the Bulldogs start off their conference play at 0-1.

The Texas A&M Aggies earned the only home win in SEC men’s basketball last night. The Reed Arena in College Station saw an impressive second-half Aggie comeback. Texas A&M was trailing Ole Miss at the half by 10 points. The Aggies rallied back in the second half, scoring 38 points, doubling their first-half score.

The Rebels were led by senior guard Breein Tyree’s 21 first-half points. This effort was wiped out by Aggie senior forward Josh Nebo. Nebo scored 17 points and obtained nine rebounds and four blocks. The final score resulted in a 57-47 Aggie victory. This win boosted the Aggies to a 1-1 conference record as the Rebels fall to 0-1.

Wednesday night will feature three more SEC matchups. Mississippi State will head to Alabama at 7. Both are looking to earn their first conference win. Arkansas will go to Baton Rouge to take one LSU as both teams look to avoid their first SEC loss. Finally, Vanderbilt takes on Auburn on the road for their first conference matchup against a 1-0 Auburn team.