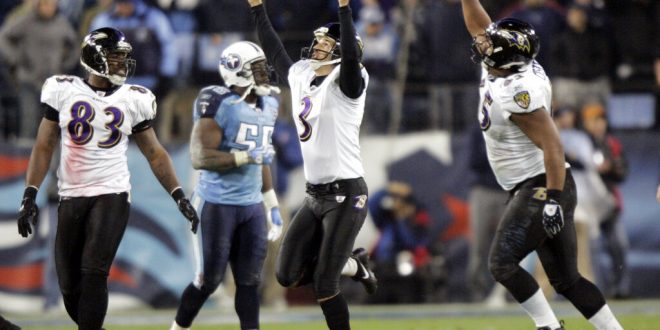 FILE - In this Jan. 10, 2009, file photo, Baltimore Ravens' Matt Stover (3) celebrates as Tennessee Titans linebacker Stephen Tulloch (55) walks away after Stover kicked a 43-yard field goal with 53 seconds left in the fourth quarter to give the Ravens a 13-10 win in an NFL football divisional playoff game in Nashville, Tenn. At left is Ravens tight end Daniel Wilcox (83) and at right is center Chris Chester. The Titans playing the Ravens in the divisional round on Saturday night, Jan. 11, has revived strong memories of a very intense and bitter playoff rivalry along with the agony of possible Super Bowl titles lost. (AP Photo/Wade Payne, File)

AFC divisional playoff action starts Saturday when the Tennessee Titans head to Baltimore to take on the Ravens.

The Titans are coming off an impressive 20-13 wild card win against Tom Brady and the New England Patriots. The Titans won the game after Brady threw a pick 6 that went right into the hands of former Patriot, Logan Ryan. Not only did the Titans win the game, but they won it in New England, and also made this the earliest exit for the Patriots in the postseason since 2009.

AND TOTALLY REDEEMS HIMSELF pic.twitter.com/xWKS5HSqaE

Some keys for the Titans include running back Derrick Henry, who in the last seven games, has put up six 100-yard games and an NFL-high 11 touchdowns and 1,078 yards. The running back also captured the 2019 rushing yards title with 1,540 yards.

Henry talked about the mentality going into the game.

Another key for Tennessee is quarterback Ryan Tannehill, who after taking over in week 7, has completed 26 touchdowns, tying for second-most in that span. Tannehill also led the league in passer rating this season with 117.5, making it the best mark in franchise history.

The Ravens finished first overall in the NFL, 14-2, earning themselves a bye-week in the first round of the playoffs. Ravens’ star quarterback Lamar Jackson is the front-runner for MVP and has led the Ravens to a franchise-best 12-game winning streak. Jackson also broke Michael Vick’s single-season rushing record, 1,039 yards, with two games still left in the season.

Besides Jackson, the Ravens have running back Mark Ingram, who is listed as questionable for Saturday’s game. Ingram is working to come back from a left calf strain. The running back finished fourth in the league for touchdowns with 15 and also ran for 1,018 yards.

Jackson talked about prepping for the game.

The Baltimore Ravens broke the NFL’s single team rushing record in their final game after a 9-yard run by Gus Edwards, giving the team 3,171 rushing yards for the season. Baltimore broke the old record, 3,165, set by the New England Patriots in 1978. The Titans rank 12th in the league in run defense, giving up 104.5 yards per game.

This game will feature 5 Heisman Trophy winners including:

Winner of this game will go on to face the winner of the Texans/Chiefs in the conference championship.

The game begins tomorrow night at 8:15.