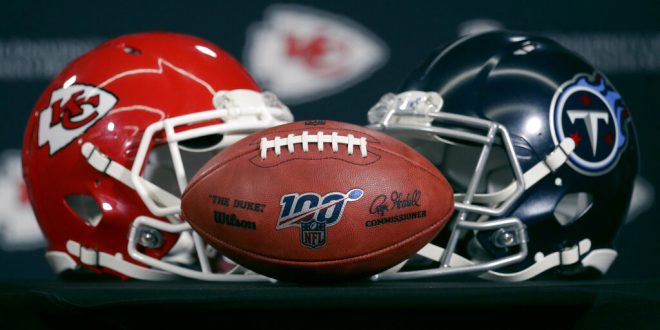 Helmets for the Kansas City Chiefs and the Tennessee Titans are displayed during a news conference for this weeks NFL conference championship football game at Arrowhead Stadium in Kansas City, Mo., Thursday, Jan. 16, 2020. (AP Photo/Charlie Riedel)

It’s been over 20 years since the Titans have won a conference title and 19 years since they’ve appeared in the game. On the other hand, for the Chiefs, it might feel like last week that they appeared in the conference title game. Kansas City lost by a touchdown in overtime to the Patriots just a year ago. Odds are that the loss could still be lingering in the mind of Patrick Mahomes and the rest of his squad.

The Chiefs, who have only appeared in this conference championship twice, would love to bring their owner Clark Hunt a victory. The AFC Championship trophy is named after Clark’s father, Lamar Hunt. Hunt was the founder of the team and was commemorated with his name on the trophy in 1984.

This matchup has its roots! pic.twitter.com/HW9OgeKFCI

It’s been a long season and it’s not quite over just yet. For the Titans, it has been an up and down journey. After a 9-7 regular season, the team shocked the Patriots two weeks ago and took down MVP Lamar Jackson and the Ravens last week. In Week 10, they secured a 35-32 win against the Chiefs after a back and forth game.

Quarterback Ryan Tannehill took over in mid-October for Marcus Mariota. Tannehill has been the comeback leader for the team and has already enjoyed more success in Tennessee than in his seven years in Miami.

Second-year head coach Mike Vrabel said he has seen his team improve over the course of the season. Vrabel is no stranger to playoff games, and he understands what goes into a championship run after hoisting the Lombardi trophy three times in his playing career.

Coach Vrabel on the team’s improvement:

For the Chiefs, it has been their goal to get back to the AFC Championship for a while. After the crushing defeat a year ago, the Chiefs have made it their mission to not let it happen again. Since their Week 10 loss to the Titans on the road on Nov. 10, they have not dropped a game.

Last week, quarterback Patrick Mahomes and his squad were down by 24 last week against the Texans. Kansas City went on to rally and crush the Texans, 51-31, in flashy comeback fashion.

Head Coach Andy Reid pinpointed the team’s loss to the Titans as a huge turning point for his squad. Reid also said his team is not satisfied just yet and is prepared to face a really good football team.

Coach Reid on the Titans:

Coach Reid on the Chief’s preparation:

Derrick Henry has been a workhorse for Tennessee this season. The superstar back has become the first player in the Super Bowl era to rack up more than 180 yards in three consecutive games. On top of that, he has the most rushing yards spanning across the four postseason games so far with 561 yards.

In addition, he has set the franchise’s postseason rushing record in each game and added some passing yards to his stats. He threw a Tebow-Esque jump pass for a touchdown in the win against the Ravens. Linebacker Wesley Woodyard pointed out that Henry is more than a playmaker for the team as he has stepped into a leadership role for the team.

A healthy Patrick Mahomes is dangerous. Even with an ankle and knee injury that plagued him throughout the season, Mahomes has still managed to put together a brilliant season. And isn’t finished yet. Surrounded by a plethora of playmakers like tight end Travis Kelce, wide receivers Tyreek Hill and Sammy Watkins and running back Damien Williams, his job is made to look effortless.

His production has only elevated in the playoffs. Last week he became the first player to throw five touchdown passes, throw for a minimum of 300 yards and record at least 50 on the ground in a playoff game. Apparently, he isn’t planning to stop the offensive production anytime soon either.

Mahomes on his postseason production:

For now, both teams will focus their energy on this conference championship game. However, on the horizon, looms what every football player ever dreams of: the Super Bowl.