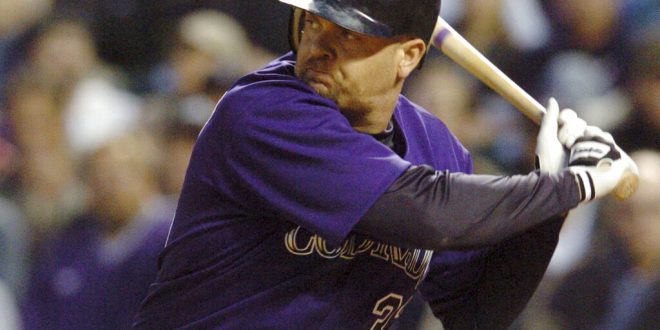 FILE - In this Wednesday, June 30, 2004 file photo, Colorado Rockies' Larry Walker gets ready to swing at a pitch from Milwaukee Brewers' Ben Sheets in the fourth inning of a baseball game in Denver. Derek Jeter came within one vote of being a unanimous pick for the Hall of Fame while Larry Walker also earned baseball's highest honor on Tuesday, Jan. 21, 2020 (AP Photo/David Zalubowski, File)

The ballot for the 2020 Major League Baseball Hall of Fame is out and two legends will head to Cooperstown for the induction. Only 233 players out of 19,000 who have stepped on MLB fields have been elected for the Hall of Fame. This statistic means that about 1 percent of all major league baseball players are elected to the Hall of Fame.

Larry Walker finally had his shining moment despite having the fear of coming up short once again after being on the ballot for 10 years.

Walker became the first Rockies player in franchise history to receive the Hall of Fame honor. Walker etched his name right on time with this being his last year of eligibility.

In order to be inducted to the Hall of Fame, players must appear on 75 percent of the submitted ballots. Walker received 76.6 percent in his tenth and final year on the Hall of Fame ballot and will make an appearance at Cooperstown.

Larry Walker played professional baseball for a time span of 17 years. During his career, he has played for the Montreal Expos, the Colorado Rockies and the St. Louis Cardinals.

At 22 years of age, Walker began his journey with the Montreal Expos in 1989. Walker played a total of five seasons with the Expos before heading Colorado to play for the Rockies. According to the Montreal Gazette, The outfielder played 1,170 games with the Rockies and won three batting titles in 1998,1999 and 2001 while hitting .334 with 258 homeruns and 848 RBIs.

The Rockies then sent Walker to St. Louis in the middle of their 105-win season in 2004. He made his first World Series appearance while setting three Cardinals postseason records.

He announced he was retiring from playing baseball after Game 6 of the 2005 National League Championship Series. Walker ended his career with a total of 383 home runs, 1,311 RBIs and .313 batting average and seven Gold Gloves for fielding.

The newly elected Hall of Famer ranks twelfth on the all time list ahead of Hall of Famers Hank Aaron, Willie Mays and Mickey Mantle.

The St. Louis Cardinals organization congratulated Walker’s accomplishment stating, “Although Larry’s time with the Cardinals came at the end of his distinguished career, he played a significant role in 2004 in helping the Cardinals to their first National League title and World Series appearance in 17 years.”

Walker says being elected with iconic Yankee shortstop Derek Jeter is an honor.

The 2020 Hall of Fame induction take place on July 26 at Cooperstown, NY.