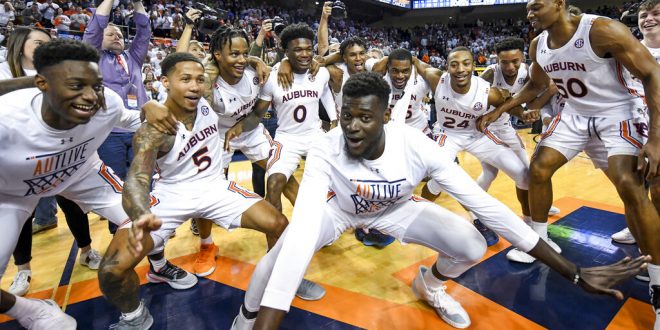 Auburn players celebrate after a 75-66 win over Kentucky in an NCAA college basketball game Saturday, Feb. 1, 2020, in Auburn, Ala. (AP Photo/Julie Bennett)

Auburn and Arkansas are two of the best teams in the Southeastern Conference at this point in the season.

Both squads come into tonight’s matchup on an upward curve. Auburn (19-2, 6-2 SEC) and Arkansas (16-5, 4-4 SEC) have combined to win six of their last seven games and sit in prime position for NCAA Tournament bids.

The Razorbacks have a prime opportunity to pick up a marquee victory that will really improve its tournament resume.

The Razorbacks have great records, both at home and overall. The team’s 11-2 at Bud Walton Arena this season. Recently, however, the team has faced challenges at home.

Arkansas has dropped two of its last three games at home, including a two-point upset by South Carolina on Jan. 29.

And at 16-5 overall, the Razorbacks have an incredibly respectable record. Unfortunately, a lot of those wins are against weaker competition. According to ESPN bracketologist Joe Lunardi, the Razorbacks are a nine seed in his most recent NCAA Tournament projections.

The win that’s helping the Razorbacks the most is its triumph over Indiana back in December. Outside of that, there’s not a lot of substance there for Arkansas.

That’s why a victory over Auburn would go a long way in solidifying its bid for the NCAA Tournament next month.

Tigers Hoping to Clinch Fifth Win In a Row

The Auburn Tigers are streaking.

The team has won four games in a row after its only two losses came in a row during the month of January. But with an impressive home win over Kentucky now under its belt, Auburn’s tournament resume is sitting in a good spot. A road victory over Arkansas, however, would further cement the Tigers’ status as one of the best teams in, not only the SEC, but the country.

After Arkansas, Auburn’s strenuous schedule continues with a visit from the No. 1 team in the SEC, the LSU Tigers.

Because of this, tonight’s game is extremely important for the Tigers. They’d like to avoid a hangover after the huge UK win, but at the same time not look forward to the weekend against LSU.

If the Tigers win this one, it could be quite the springboard into the most important portion of the season: March.