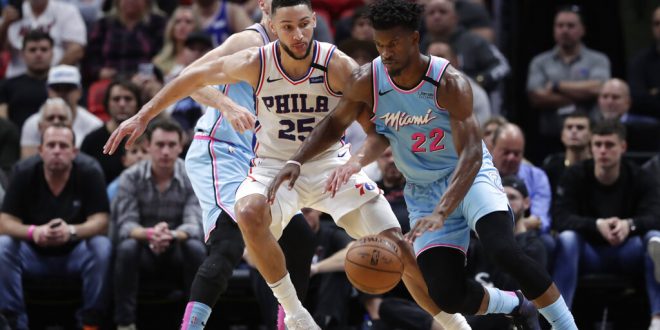 American Airlines Arena was rocking Monday night after the Miami Heat delivered a big win over the Philadelphia 76ers, 137-106.

Tonight's 137 points are the most we have ever scored against the Philadelphia 76ers. #HEATWin pic.twitter.com/hBPPmsPkJM

The Miami Heat completely dismantled the 76ers thanks to an inspired performance from Jimmy Butler. Butler scored 38 points, grabbed seven rebounds and dished out two assists.

The Heat improved to 34-15 as they committed a franchise low of only three turnovers last night. They also tied the franchise history (1992) of longest streak shooting 80% from the free-throw line with eight games in a row.

Miami is scheduled for a road trip to face the Los Angeles Clippers Wednesday night at 10:00 p.m.

Ben Simmons called the 76ers “soft” after Monday night’s blowout loss to the Heat, and credited a big part of it to Miami’s physicality.

“We were soft,” said Simmons, who had a game-high four turnovers. “The physicality side of things, we gotta step that up. That comes with experience, also just comes with personality.” -Ben Simmons

Philadelphia was led by Joel Embiid’s 29 point, 12 rebound and 2 assist performance. Ben Simmons also had a noteworthy night with 16 points, 8 rebounds and 7 assists.

The 76ers next match up will be a road game on Thursday at 8:00 p.m. versus the Milwaukee Bucks.