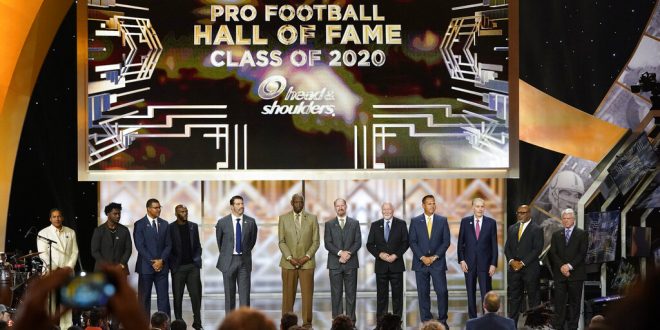 While a usual class holds seven or eight inductees, the special centennial class will see 20 new individuals enshrined. Fifteen of the members were announced last month, including 10 senior players and coaches Bill Cowher and Jimmy Johnson.

As the Super Bowl loomed over the weekend though, a selection committee in Miami Beach announced the newest members of the Hall on Saturday: wide receiver Isaac Bruce, guard Steve Hutchinson, running back Edgerrin James, and safeties Troy Polamalu and Steve Atwater.

The wide receiver was one of the main components in the St. Louis Rams’ “Greatest Show on Turf” offense from 1999 to 2001. At the time of his retirement in 2010, Bruce was the second-leading receiver in NFL history with 15,208 yards, trailing only Jerry Rice.

As a result of his impressive efforts with the Rams, Bruce was a four-time Pro Bowler and Super Bowl champion in 1999. This was his sixth year of Hall of Fame eligibility.

The wait is finally over.

Hutchinson, a left guard, made his mark with the Seattle Seahawks and Minnesota Vikings in the 2000s. He was a seven-time Pro Bowler. In the 2006 offseason, he signed a $49 million deal that made him the highest paid guard in league history at the time. This was Hutchinson’s third year of eligibility.

Strongly believe Steve Hutchinson should join us in the Hall. I had the pleasure of playing 2 years with Hutch and he never gave up a sack nor a pressure. Best Guard I’ve played with as he was tough, smart and durable. #PFHOF20 @ProFootballHOF

The legendary strong safety spent his entire career with Pittsburgh since the team took him in the first round of the 2003 draft. Polamalu and his lengthy locks traveled to eight Pro Bowls, and he helped the Steelers win two Super Bowls to cap off the 2005 and 2008 seasons. This was Polamalu’s first year of eligibility, and he said this about his selection:

The hard-hitting free safety spent most of his ten-year playing career with the Denver Broncos, who drafted him in 1989. Like his fellow Hall of Fame defensive classmate, Atwater won two Super Bowls and went to eight Pro Bowls. It was a lengthy wait for the elite defender; this was his sixteenth year of eligibility.

Atwater may best be remembered, though, for his leveling hit on “The Nigerian Nightmare” Christian Okoye.

James was a very versatile running-back who most notably plied his trade for the Indianapolis Colts and Arizona Cardinals. He was the Offensive Rookie of the Year in 1999, and would be named to four Pro Bowls in his eleven NFL seasons.

James is the Colts’ all-time leader in rushing yards and touchdowns, and is one of 31 players in the 10,000 yards rushing club. He makes it into the hall in his fifth year of eligibility.

Were you watching at home? The newest Enshrinees were introduced at #SuperBowlLIV #PFHOF2020 | @SuperBowl | @HardRockStadium pic.twitter.com/IJwe3RLNHb

I'm a senior journalism student at Florida. I love sports, and I love covering sports. I'm one of the beat writers for the Gator soccer team right now, and if you follow me on Twitter @johnmiceli13 you'll never miss a soccer update
Previous Dusty Baker is the New Manager for the Houston Astros
Next Jimmy Butler Inspires Miami Heat to 137-106 Win Over The 76ers